A disciplined Uttar Pradesh put up a thoroughly professional performance to outwit Delhi by 46 runs in the quarter-final of the Vijay Hazare Trophy on Tuesday. 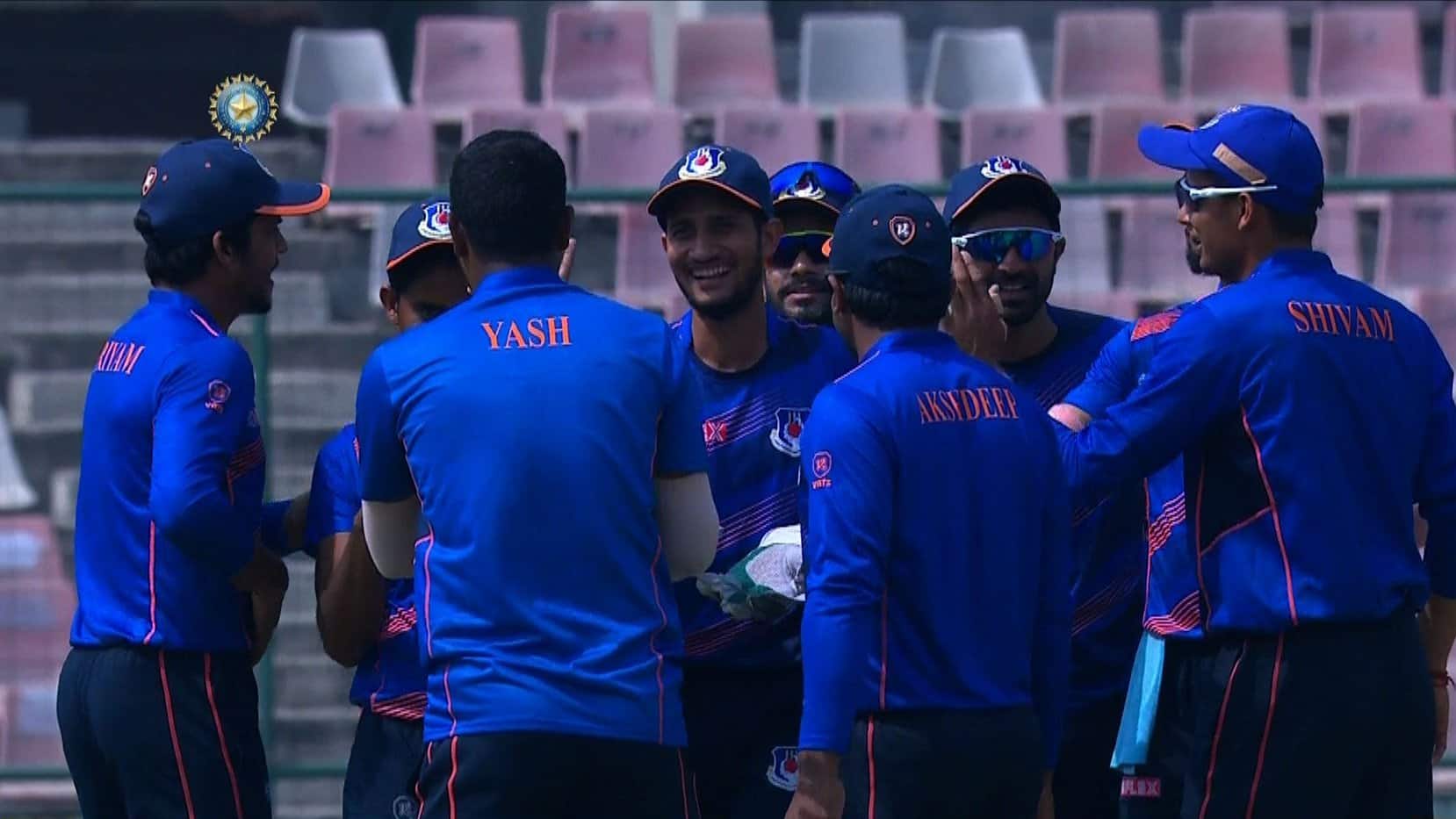 A disciplined Uttar Pradesh put up a thoroughly professional performance to outwit Delhi by 46 runs in the quarter-final of the Vijay Hazare Trophy on Tuesday.

UP will now meet Gujarat in the first semi-final while heavyweights Mumbai will be pitted against Karnataka in the other last four clash.

Uttar Pradesh rode on keeper-batsman Upendra Yadav’s stroke-filled 112 off 101 balls and skipper Karan Sharma’s 83 off 100 deliveries to post a competitive 280/7.

The UP bowlers then did well enough to restrict Delhi to 234 in 48.1 overs with none of the middle-order batsmen getting a move on after a top-order collapse, having lost half of the side within 20 overs.

Shivam Mavi 1/31 in 8.2 overs was brilliant until he had to be taken off the attack for bowling a couple of beamers.

Put into bat at the Kotla, UP suffered a top-order collapse and was tottering at 25 for 3.

Both the openers Abhishek Goswami (6) and Madhav Kaushik (16) fell cheaply. While Goswami top-edged to wicket-keeper Anuj Rawat off pacer and skipper Pradeep Sangwan (2/49), Kaushik too top-edged to Rawat off left-arm pacer Kulwant Khejroliya (1/50).

Young Priyam Garg (0) was found short by a direct throw from Hiten Dalal as UP found itself in all sorts of trouble.

Skipper Karan (83) and veteran Akshdeep Nath (15) tried to steady the ship with their 41-run fourth wicket stand, but Nath perished in the 17th over, as he also edged to Rawat off Simarjeet Singh (2/51).

The two conjured crucial 129-runs for the fifth wicket to pull the team out of trouble.

While Sharma hammered 11 fours in his 100-ball knock, Yadav struck 11 boundaries and two maximums in his innings, as the two took on the Delhi bowlers.

UP were 150/4 after 32 overs and were in pursuit of a decent total. But of-spinner Lalit dismissed Sharma in the 39th over.

Then Upendra took the onus on himself and found an able ally in Sameer Choudhary, who chipped in with quick-fire unbeaten 43 off 35 balls, which enabled them to go past the 275-run mark.

Skipper Prithvi Shaw blazed his way to an unbeaten 185 off just 123 balls as Mumbai stormed into the semi-finals of the Vijay Hazare Trophy with a crushing nine-wicket win over Saurashtra in the fourth quarter-final on Tuesday.

Opting to bat, Saurashtra rode on Samarth Vyas’ unbeaten 90 to post 284 for 5, but it was overshadowed by Shaw’s blitzkrieg, as Mumbai chased the target in just 41.5 overs.

Chasing 285, Shaw went on the offensive from the word go as Mumbai scored 67 for no loss after nine overs.

The diminutive right-hander did not spare any of the opposition bowlers as he hit 21 fours and seven sixes in his whirlwind innings.

Shaw, who now holds the record for the highest individual score in the tournament, kept playing his shots and completed his 50 off 29 balls.

The youngster continued the onslaught and notched up his hundred in 67 balls even as the opening duo added 238 for the first wicket and laid the foundation for the win.

Jaiswal hit 10 fours and a six, but perished when Mumbai was on the cusp of a win.

Shaw, then in Aditya Tare’s (20 not out) company completed the formalities with ease.

Mumbai then pegged back Saurashtra as they snared two quick wickets and left them in a spot of bother at 85 for three.

One-drop batsman Vishvarajsinh Jadeja (53 off 69 balls; 4×4; 1×6), continued to play a steady innings, but he didn’t get the support at the other end.

Mumbai offie Tanush Kotian gave Saurashtra the fourth blow after dismissing Arpit Vasavada (10) cheaply as they were reeling at 121 for 4.

When it looked like Jadeja and Vyas were taking the game away, 21-year-old leggie Prashant Solanki removed the former as Saurashtra lost half its side for 155.

But Vyas, who came in at number six, and Chirag Jani (53 not out off 38 balls), then rallied the innings and provided the much-needed momentum with their 129-run unbroken stand for sixth wicket.

Vyas hammered seven boundaries and four maximums, while Jani struck five fours and one six, as the duo toyed with the Mumbai attack.