In the last nomination round, Soundarya ended up at the bottom along with Sumbul Touqeer Khan, Ankit Gupta, Archana Gautam and rapper MC Stan.

She might be shown the door and Namrata Thakker explains why.

The end of the love drama 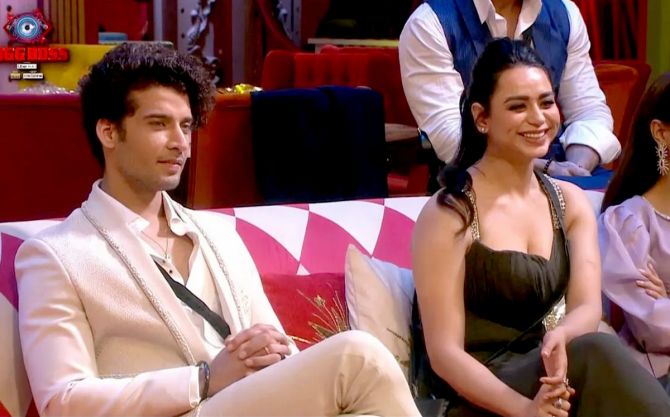 With Gautam Vig already out of the show, the makers can no longer exploit his and Soundarya’s love angle, which means no more juicy content from Ms Sharma.

Gautam and Soundarya were the hottest topic of discussion for the first three weeks.

So much so that an entire task was dedicated to them; the housemates were challenged to prove that their relationship was fake!

Host Salman Khan also grilled them about their ‘love affair’.

Now that Soundarya’s beau is out, the drama has died down. Since the beginning, Soundarya has been hinting that the show is biased and some contestants are favoured.

When fingers were pointed at her and Gautam for faking their relationship for the game, she wondered why no one grilled Tina Datta and Shalin Bhanot about their ‘relationship’.

Even Shiv Thakare was seen telling Nimrit Kaur Ahluwalia that Tina and Shalin were using each other for the game. But no one has confronted them, including Salman.

Last week, Soundarya told Archana Gautam that the show was partial and they would get eliminated first as Tina, Nimrit and Priyanka Chahar Choudhary have done shows with Colors TV and are faces of the channel. Sajid Khan seems to know which contestant will be evicted every week.

He got it right with Gori Nagori and Gautam Vig.

Earlier this week, he told Tina and Nimrit that Soundarya is giving a good final performance in the nomination task.

Was that a hint that she would be going home?

Will Soundarya get evicted? Predict!