Boney Kapoor's kids Arjun Kapoor, Anshula Kapoor, Janhvi Kapoor and Khushi Kapoor share an ever-evolving relationship. On the producer's birthday, here's a look at how they've found each other as adults. Film producer Boney Kapoor is celebrating his 66th birthday today. On his special day, here’s a look at how his relationship with his four children–Arjun, Anshula, Janhvi and Khushi Kapoor–has evolved over the years. Boney Kapoor was first married to Mona Shourie, with whom he had two children Arjun and Anshula. They were together for over a decade, before he famously fell in love with the iconic star Sridevi, with whom he had two daughters–Janhvi Kapoor and Khushi Kapoor.

Mona Shourie died of cancer in 2012, mere months before Arjun’s acting debut. And Sridevi died in 2018 while attending a family wedding in Dubai. In a cruel twist of fate, her death came just a few months before Janhvi made her Bollywood debut.

But it was the tragic passing of the screen icon that brought Boney’s family together, and helped him reconnect with his eldest children. Arjun and Anshula stood by their father as he grieved, and subsequently formed an unlikely bond with their half-sisters.

Arjun once spoke about his relationship with his father, which got strained after he separated from Mona. “It’s about compatibility, there is friendship, there is saturation. There is unfortunate frustration, people go through different phases in life. You could have been in love with somebody, and you can fall in love with somebody after that, and that has to be understood,” Arjun told Film Companion. 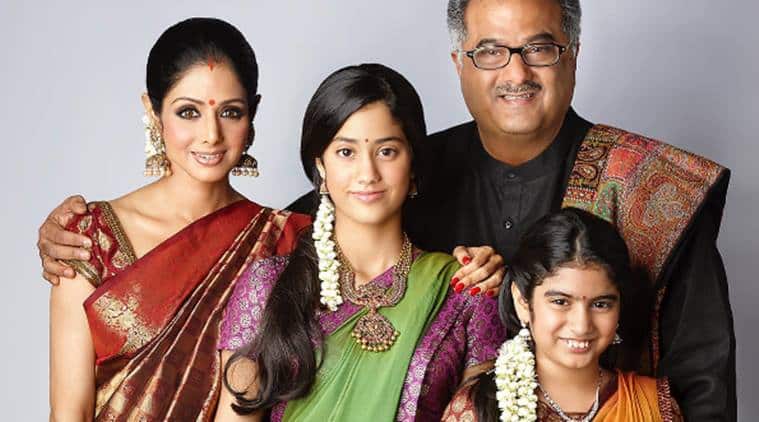 It was his mother’s upbringing, Arjun said, that spurred him on to reach out to his dad in his moment of grief. “My mother’s upbringing came in my head. She would’ve told me to be by my father’s side regardless of what obstacles we face, because of a choice he made where he fell in love. And I respect my father for falling in love again. Because love is complex. And we would be silly and churlish sitting here in 2021 saying that you only fall in love once. It’s very Bollywood-ised. Love is complex, love is complicated, love isn’t always about being in love,” said Arjun.

In an interview with Forbes, Boney also spoke about how he and his kids coped with Sridevi’s demise, and how they connected with each other in the most unfortunate of circumstances.

He said, “Our family, especially all my four children, have stood together and braved this situation. They are now the pillars of my life and I look to them for all the love, support and affection.”

Boney said that the greatest tribute that he could give Sridevi is to be a good father. “And as a professional and ardent fan of hers, it would be to make the kind of entertaining and heartfelt content that she would have been proud of.”

And it seems like he has achieved that. Arjun said that while he can never ‘be okay’ with what his dad did, he has grown to understand him. “I can’t say I’m okay with what my father did, because as a child I felt the repercussions, but I understand it. I can’t say ‘theek hai, hota hai (It’s fine, these things happen)’, because I will always wonder. But when I rationalise it as an older person who’s dealing with his own relationship highs and lows, you understand,” he said.

In another recent interview, Arjun said that he would have ‘resented many things’ and might have not reconnected with his father had it not been for Janhvi and Khushi. He told Harper’s Bazaar India, “I’ve not lived with my father as much as I would have liked to. I keep getting told that I am like him, but I don’t see it. Through meeting Janhvi and Khushi, and breaking that barrier, I have now been able to build a more authentic relationship with him. We have all confronted many of our demons. It has to do with letting go, which is very cathartic…it is strangely therapeutic to just sit around and talk rubbish, and realise that you were holding onto things, unknowingly or knowingly, because you were supposed to.”

He added, “But I love my father more because of both of them. It is complex. I have been able to see my father in a different light. If I didn’t share this equation with Janhvi and Khushi, I would have resented many things and never felt the need to reconnect with him at this level.” Anshula, in a Q&A session on Instagram, was once asked by a fan who Boney’s favourite child is, and she quipped, “Khushi”. She even tagged her siblings and declared that the family secret is out.

She ended the post on a serious note, however, and said that Boney loves all his children equally. Although the producer freely admitted that while this may be the case, Khushi is the apple of his eye as she is the youngest.

“As a father, all my children are my favourites, but Khushi is the apple of my eyes. Woh chhoti hai na? Sab se chhoti bacchi hai meri (she is the youngest, isn’t it? The youngest child of mine). She (Khushi) holds a special place in my heart. Currently all the more, because she is not around. She is abroad for higher education. Having said that, Arjun is in my heart. I am not very vocal about my love for my children because I feel my love for them is natural. I am their parent, why do I have to say that I love them? Of course, I do!” he told IANS.

Recently, the Kapoor siblings all came together to make Father’s Day special for Boney Kapoor.