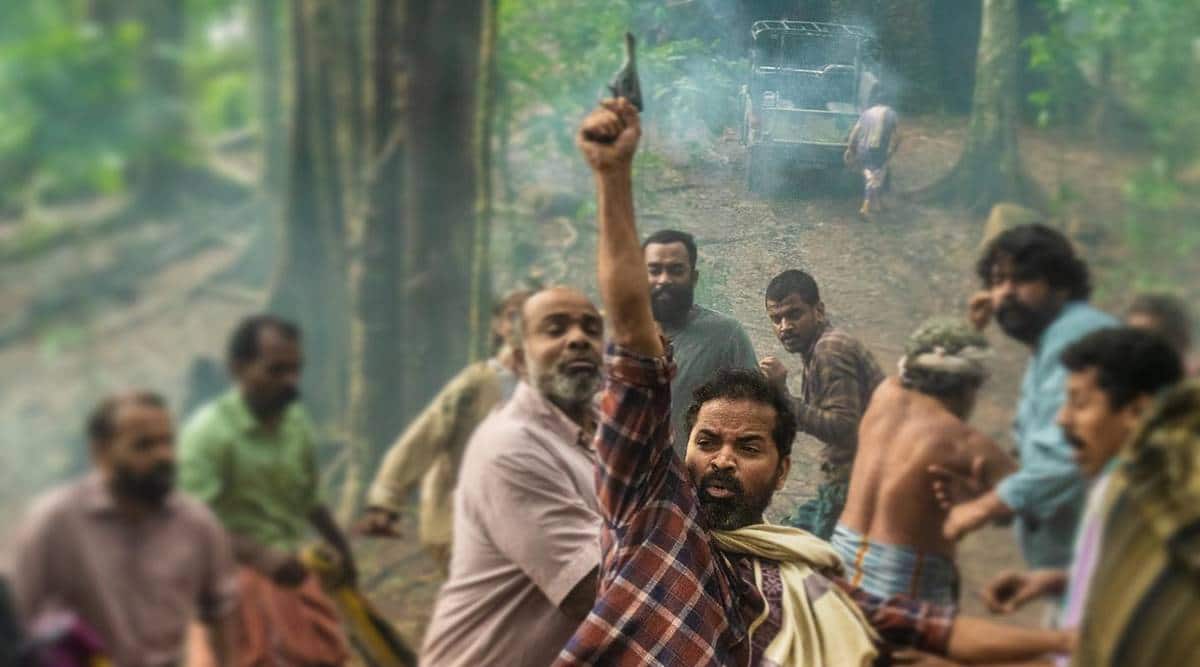 Lijo Jose Pellissery is a big cynic. If that was ambiguous from his previous movie Jallikattu, his latest film Churuli makes it less ambiguous. He is not willing to bear the cross of placing too high a value on human nature. Film after film, he explores how men can transform into animals without much prompting, provided time and place are conducive for them to drop the pretence of civility.

Like Jallikattu, Churuli is also set on a dense hilltop. In this tiny village nestled amid a forest, the line that separates humans from wild animals is very thin. Not just for animals, it is also a sanctuary for criminals, who are on the run from the law that rules the civilised society.

Two undercover cops under their assumed names Anthony (Chemban Vinod Jose) and Shajivan (Vinay Forrt) are on their way to Churuli. They have been tipped off by an informer that a fugitive named Joy, who is an escape artist, is hiding amidst the area’s dense green cover. Anthony, a veteran cop, who has undertaken several similar missions in his career, doubles up as the mentor of the relatively inexperienced Shajivan as they navigate the challenges of the treacherously slippery labyrinth of the hilltop village.

Anthony assumes that 20 years of his experience dealing with such undercover tasks has prepared him for Churuli. But, this is no ordinary place. And it seems nothing can prepare for the challenges posed by Churuli. It is a mystic land that evokes something very primal in everyone who sets foot in it.

At the beginning of the movie, a woman narrator tells a folk tale. It is the legend of a phantom who is notorious for misleading the people who pass through the jungle. The name of the phantom is Perumadan. Once a learned Brahmin set out on a mission to capture Perumadan, but ends up falling victim to his deceit.

In the story, Perumadan is sitting in the basket on top of the Brahmin’s head. In the movie, Perumadan is in the very air of Churuli and corrupts everyone who breathes it.

What the place offers is the ultimate freedom. Once people cross the dangerous bridge that leads into the mysterious land, they become different people. They no longer need to pretend to be kind, courteous and well-behaved in this lawless land. The constructs of civilized society don’t apply there. There are no heroes and role models to look up to. Everyone in the village knows every man in there is wicked and treacherous. And nobody aims to find a higher purpose in their lives. All they want is to indulge every sense without somebody standing over their shoulders and judging them.

At first, Shajivan is presented as an obedient subordinate, who has faith in the rule of law and wants to uphold it. But, the atmosphere of Churuli brings something else out of him. He gets to satisfy his every urge without having to be answerable to anyone.

Lijo Jose Pellissery has done a beautiful job of visually imagining the mysterious maze laid down by screenwriter S. Hareesh. Cinematographer Madhu Neelakandan has explored the picturesque scenery of Churuli from various and vivid angles, giving us a pleasant viewing experience.

Churuli is streaming on SonyLiv.