Comedy Premium League review: The show gets real when comics take digs at themselves and go off the script. 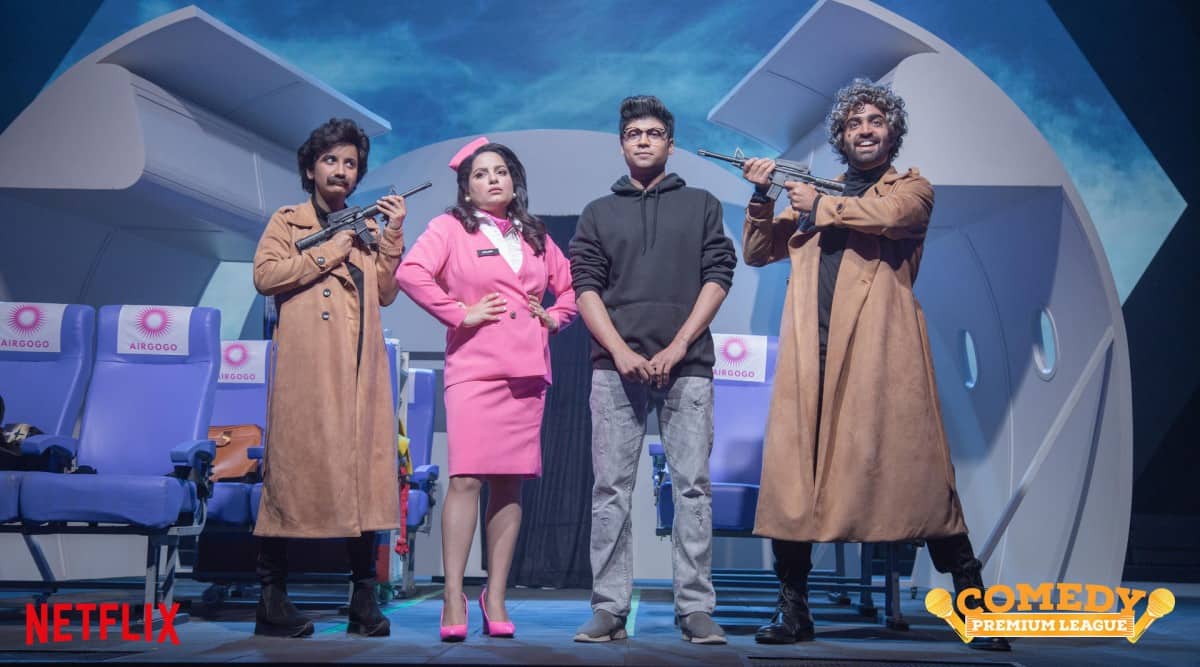 Tanmay Bhatt doesn’t believe in being friends with his exes. Prashasti Singh is a firm believer in beauty over brains. Kaneez Surka always harboured a ‘Anjali’ crush since Kuch Kuch Hota Hai days, and Sumukhi Suresh can rock a school-going girl persona, replete with a unibrow and ribboned pigtails. Oh, and spoiler alert, Amit Tandon’s alter ego is that of a rapper who is called ‘The Family Man’. All this and more are revealed in Netflix’s Comedy Premium League (CPL), a reality-meets-stand-up-meets-variety show series.

Comedy Premium League is sort of an uncharted territory for the Indian audience. We haven’t had something like this in a while. Not many millennials, leave alone Gen Y or Z would remember a show called Tea Time Manoranjan, a variety show featuring comics that aired on Doordarshan in the 90s. It had people like Vrajesh Hijree, Amit Mistry, Suresh Menon and Raju Srivastav as the talent. Hosted by Divya Seth, the 30-minute show had the comics perform stand-up, improv and sketch comedy in front of a live studio audience. CPL is almost that, but larger, braver and more competitive.

The 16 comics are divided into four teams each, and are given various situations, a debate topic and a situation where they are all required to scratch their grey cells, and hopefully come up with enough material to ‘not just tickle our funny bones, but to fracture them’, as Prajakta Koli wisely remarks. In 40-minute formats, across four episodes, it’s a given that all jokes will not land. But those that do make you laugh out loud. IDGAF Iguanas comprising Tanmay Bhatt, Rohan Joshi, Sumukhi Suresh and Sumaira Sheikh roast their own teammates, and it does bring the ill-famed AIB Roast of 2014 to mind. But the jokes and punchlines land, the comparison notwithstanding. Amit Tandon, well in his forties, matches his far younger teammates step-for-step as they present a rap number. Mallika Dua is a delight, as she unabashedly returns to the world she knows best, and gets the laughs.

But the real delight of Comedy Premium League is their ‘unscripted’ bits. Sketches sure work. They have taken time to work on the content, invest on sets — the production value is insane — and their costumes. But it’s when they try impromptu content that these 16 insanely talented people really flourish. The ‘punchline’ round for starters, where they have to come up with stuff on the spot, or the Tu Tu Main Main round, which is essentially a debate prep. The laughs come non-stop when the comics turn to themselves, be it Tanmay recounting his break-up with AIB, or Sumukhi Suresh taking a dig at her show Pushpavalli. That’s where it gets real, otherwise what is the point of getting 16 ‘sunny’ people together? And that authenticity keeps you hooked. The way Rahul Dua exclaims at the scoreboard, or the way Rahul Subramanian keeps the morale of his team high, that’s where the humour gets genuine. It’s a relief to see these household names not taking themselves and their stardom seriously. If they are ok to crack a joke at themselves, Indian comedy might just be in safe hands.

Indian stand-up comedy has always been accused of being an ‘all-boys’ club, but with several women contestants, Comedy Premium League feels like a step in the right direction. Women give boys a run for their money, and outrun them where cuss words and certain innuendoes are concerned. Sure enough, CPL is R-rated, but so are the many open mics we all attend. We see certain digs at current events — Covid pandemic provides ample fodder, as does comics getting arrested. But the brave hearts at Comedy Premium League do attempt a dig at a certain primetime TV host, a certain channel and some political scenarios. Half an extra star just for that. Clearly, there is a desire for political satire; imagine what would have happened if they didn’t have the shackles of censorship or fear of political and social retribution? We might just have had our own version of The White House Correspondents Dinner. Given the situation, we don’t even have a watered-down offering of a Comedy Central Roast. Sigh. Comedy Premium League is the closest we will get to having our very own Saturday Night Live, given the times we are living in.

(The review is based on the first four episodes of the series.)