Zeeshan Khan is evicted, even as love blossoms in the house.

Day 18 begins with some of the housemates chilling in the living area.

After Neha leaves the scene, Shamita Shetty and Raqesh Bapat try to make Millind understand why Neha decided to change her partner. They also tell him to not take things personally as it’s a game in the end.

In the garden area, Neha approaches Millind to sort things out. He breaks down while expressing his feelings and Neha consoles him along with Zeeshan Khan.

Akshara Singh and Pratik Sehajpal join the conversation. Hearing Millind talk about the journey so far, Akshara gets emotional and starts crying.

Pratik apologises to her for ditching their connection and the two have a heart-to-heart talk.

In the afternoon, a task called Red Flags is announced to choose the new Boss Lady and Boss Man of the house.

Divya Agarwal and Zeeshan have to make sure that no one breaks the house rules. If they do, they get a red flag. Divya and Zeeshan can make new rules too.

At the end, the connections with least number of flags will become contenders for Boss Lady and Boss Man.

The task starts and soon Bigg Boss pulls up Divya and Zeeshan for not understanding the game properly and wasting time. After this warning, they start making new rules. Divya gives red flags to Pratik and Nishant Bhat for breaking the rules. Moose Jattana also gets a flag.

Pratik rebels and starts breaking the flags given to him. He and Nishant decide to protest against the current Boss Lady and Boss Man in the task.

The situation turns chaotic when Zeeshan tries to stop Nishant and Pratik. They start arguing.

Things turn ugly when Zeeshan and Pratik get physical with each other.

Meanwhile, Moose and Divya get into a nasty spat too.

Then, Divya defends her connection and starts fighting with Pratik. More fights ensue as the housemates get divided because of Pratik and Zeeshan.

Ultimately, Bigg Boss cancels the task and asks everyone to gather in the living area. The contestants are shocked as Zeeshan is asked to leave the house for breaking the most important rule — getting into a physical fight.

Zeeshan says goodbye to everyone, except Pratik, and exits the Bigg Boss house. In the kitchen area, Shamita and Raqesh share some cute moments as he tries to apologise for not listening to her. 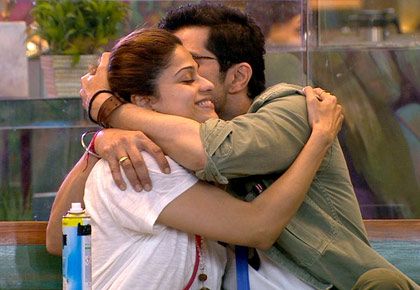