Jaya Bachchan and son Abhishek Bachchan attended the prayer meeting for Director Rakesh Kumar, who passed away on November 10.

Rakesh Kumar was not a media-made success story. Out of the nine films he directed, five featured Amitabh Bachchan and they were all hits.

Rakesh first worked with Bachchan in Zanjeer, which Prakash Mehra produced and directed. Rakesh was an assistant on Zanjeer, full of ideas. This was when he discussed Khoon Pasina, his directorial debut, which featured the Big B and Rekha.

Two years later, Rakesh directed Amitabh and Rekha once again in Mr Natwarlal, which was an even bigger hit.

Composer Rajesh Roshan gets the credit for making Bachchan sing in his own voice for the first time. The song Mere Paas Aao Mere Doston was a chartbuster as was Lata Mangeshkar’s Pardesia Yeh Sach Hai Piya with Kishore Kumar.

Do Aur Do Paanch in 1980 was less successful, but in retrospect, it is one of Bachchan’s most beloved films among children.

AB and Shashi Kapoor played con men disguised as teachers in a school to kidnap a child for a ransom. The film has the unique distinction of featuring comic superstar Mehmood’s voice (along with Lataji, Kishore Kumar and his son Amit Kumar in the song Prem Se Humko Jeene Do) although he does not feature in the cast. 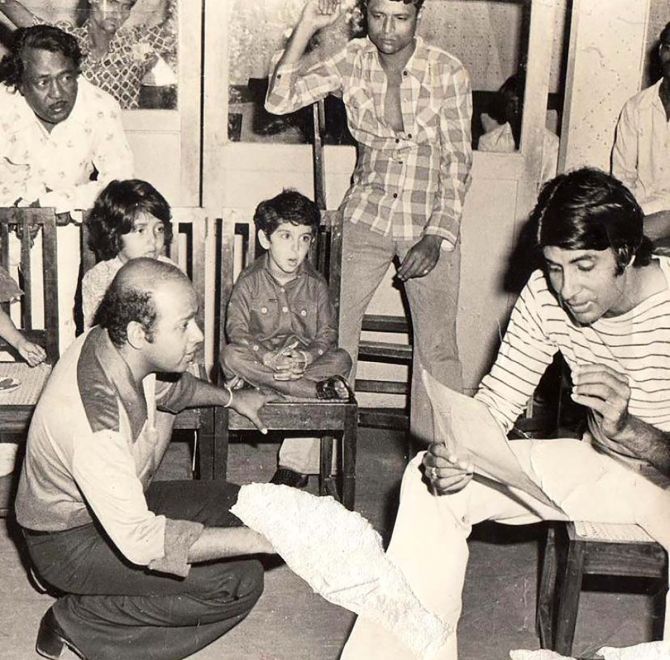 In Saara Zamana, Bachchan made history when he danced at the Netaji Subhas Chandra Bose stadium in Kolkata with live bulbs on his jacket. The film starred Amjad Khan alongside Mr Bachchan as inseparable friends.

On his blog, Bachchan wrote:

‘Rakesh Sharma , first AD to Prakash Mehra on ZANJEER’ .. then independent director for other PM (Prakash Mehra, as we often joked with him, as the PM of the country) films .. and singularly — Hera Pheri, Khoon Pasina, Mr Natwarlal, Yaarana, et al .. and such great camaraderie on sets and else where, socially, during events and Holi ..

‘But some like Rakesh leave an imprint that is hard to remove or forget .. his sense of screenplay and direction, writing and execution on the spur of the moment and the fun times on location during Nattu and Yaarana .. his complete faith in his worth .. and the ease with which he would grant us the liberty of skipping shootings on the odd day, just to be able to spend time relaxing fooling around and being in the company of uncontrollable laughter and gaiety ..

‘A most affable and kind hearted human, ready to step up to any kind of inconvenience that artists that worked with him, faced..!

‘No, I shall hesitate to go to his funeral .. for I shall not be able to bear the sight of an inert Rakesh !

‘You made many of us prominent with your innovative ideas for story and film, Rakesh, and you shall ever be remembered.’

The lovely Rati Agnihotri, whom Rakesh Kumar directed twice in Johnny I Love You (1982) and Dil Tujhko Diya (1987) tells Subhash K Jha: “Rakeshji was always relaxed on the sets. It was a breeze working with him. There was never any stress. He was always smiling. Shooting with him was always enjoyable as the atmosphere on location was happy and easygoing. My deepest condolences to his family.”