When Director Sooraj R Barjatya thought of making a film post COVID, he felt it should be one about hope, happiness and how one could climb the various day-to-day Himalayas in our life.

The first person who came to Sooraj’s mind as the protagonist was Amitabh Bachchan.

“Amitji really liked the thought behind the script that we all have our Everest inside us, strengthening us each day,” Sooraj tells Subhash K Jha.

Next, came Anupam Kher, who has worked with the banner since his debut film Saaransh almost four decades ago.

Admitting that Rajshri is family, Anupam took in the task to rope in Boman Irani, who was hesitant to take up any film post a recent personal tragedy where he lost his best friend.

“Boman is my friend, as is Sooraj,” Kher says. “If Sooraj wanted Boman, he should get him. Besides, Boman should not miss the opportunity of being a part of such a beautiful film with Sooraj Barjatya. So I brought them together just as any good friend would.”

Thus, unwittingly, the making of Uunchai became about family, friendship and hope.

Looking back, an emotional Boman says, “I think Anupam is a generous actor, who wanted the fellow actor in me to do this beautiful film. Rajshri is a temple to me today. I feel Uunchai is a fitting tribute to my late friend.”

It is an on-the-road film from Delhi to the base camp of Mount Everest.

This is a first of a kind for Sooraj Barjatya, as weddings and rituals are replaced by senior citizens, whose lives change with a car journey and find their calling at the mountains. 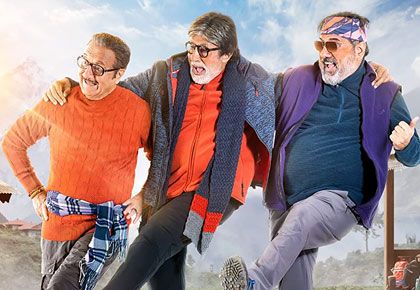