Mutliplexes want the gap between a film’s release in theatres and on OTT to be doubled from 4 to 8 weeks.
Surajeet Das Gupta reports. 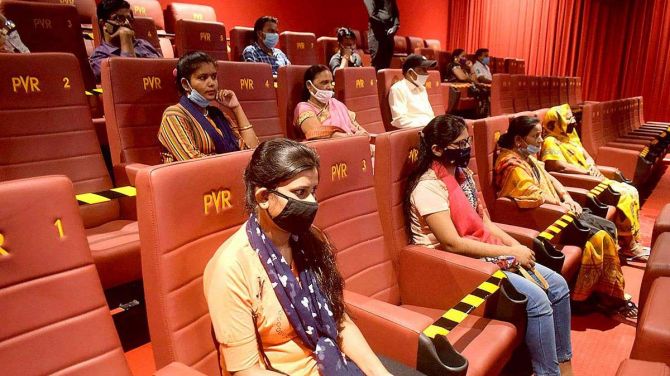 Multiplex chains have decided to push for doubling the gap between the theatrical release of a movie and its release on an over-the-top (OTT) platform from four to eight weeks from April 2022.

The move could bring them at loggerheads with OTT players who had narrowed the gap between the two releases to four weeks in the wake of COVID-related restrictions in cinemas hall capacities (50 per cent in many areas).

Production houses without the financial muscle to hold on to a movie for long periods have negotiated deals with OTT players to reduce the gap to get a better price for their content since box office collections were muted because of low occupancy in theatres.

Says Kamal Gianchandani, president of the Multiplex Association of India and CEO of multiplex chain PVR Pictures: “The four-week window was a temporary measure. We have decided that from April 2022, we will go back to the original eight-week gap. The producers have been very supportive. We can all co-exist and make the industry bigger.”

Multiplex owners are a force to reckon with as they account for around 55 per cent of the total box office collections in a normal year.

Gianchandani points out that the norm is that a movie is first released on the big screen and then on OTT, TV and other platforms.

Now that the rate of COVID-19 infections in the country is down and restrictions on movie hall capacity are being lifted, multiplex owners hope to get back in the game.

However, OTT players say production houses will have the final word in this regard — they must decide what platform they want to use and where they want to go first. The OTTs expect different models to co-exist — not merely one where every movie has to have a theatrical release first.

Says Vikram Malhotra, founder and CEO, Abundantia Entertainment, which made movies like Shakuntala Devi that had an OTT release during the lockdown: “The situation is currently fluid since there is no benchmark. It will take at least six months for alternative models of distribution to emerge. Consumers will decide whether they want to pay and see a movie in the theatre or see it whenever they want to on OTT.”

He adds that eventually there will be a consensus between producers and multiplex owners.

Motion Pictures Association estimates that OTT platforms will fork out over $1 billion for content this year compared to $700 million last year. Leading players like Disney+ Hotstar, Amazon Prime Video, Netflix and Zee, amongst others, have gone on an acquisition spree for movies to debut on their platforms.

The OTTs have also invested heavily in original content, which accounts for over 30 per cent of their total investment for this year, according to MPA.

Multiplexes and OTT players have been at loggerheads even earlier.

A row erupted when Mukesh Ambani, in 2019, said that premium members of the Jio fibre-to-home broadband services will be able to see movies simultaneously and on the same day that they are released in multiplexes.

Multiplex owners hit back, saying that they would not screen films whose rights had been sold for an earlier or simultaneous release on OTT platforms.

A stellar fallacy: On hasty assessment of environmental costs