Mention Juhi Chawla and the first adjective that pops in your mind is ‘chirpy’. It is a word that followed the actor through most of her acting career, although she has consciously tried to accept roles that are spread over the entire spectrum in the last few years. A legit superstar who collaborated with almost all the leading men of her times — Govinda, Aamir Khan, Salman Khan, Akshay Kumar and Ajay Devgn — it is her onscreen pair with Bollywood’s Badshah, Shah Rukh Khan, that remains special. Her effervescence matched well with the actor’s charm, their easy camaraderie offscreen translated into a pair whose chemistry bounced off the screen. As Juhi Chawla turns 54 today, here’s revisiting her hit pair with King Khan.

The two still share a close friendship, as was evident when Juhi stood by SRK in times of crisis when his son Aryan Khan was in jail. It’s a pity that we haven’t seen them together in recent times, because there was just inexplicable joy in watching them together. Blame it on the skewed ageism that is prevalent in film industries across the world.

SRK has the title of King Of Romance, something that he didn’t sport when he was seen with Juhi Chawla on screen.  He has that unusual talent of establishing a powerful chemistry with his female leads, be it Kajol, Madhuri Dixit Rani Mukerji, Preity Zinta, or even in recent times, Deepika Padukone. Of course, his bond with Kajol is considered to supersede all, as the duo have given several romantic blockbusters together — Dilwale Dulhaniya Le Jaaenge, Kuch Kuch Hota Hai, Kabhi Khushi Kabhi Gham and Dilwale. Well, kudos to Karan Johar and Yash Raj (for most part) for squeezing that chemistry out of them. His King Of Romance tag probably began with DDLJ and the magic spread through the rest of the era.

Yet, while Kajol-SRK became the hallmark of Bollywood’s glorious 90s, the pairing of SRK-Juhi Chawla hasn’t get its due. Shah Rukh and Juhi Chawla did several films together, perhaps a few more than he did with Kajol. There was a wholesome freshness to their pairing, and translated into exemplary comedy on screen as well. They acted in several films together, including Raju Ban Gaya Gentleman, Yes Boss, Phir Bhi Dil Hai Hindustani, Duplicate and that memorable cameo in Kabhi Haan Kabhi Naa. Unlike his films with Kajol, his films with Juhi were never intended to be die-hard romances, and yet, they always left you smiling, not unlike the whiff of a first romance — innocent and sweet .

With Juhi Chawla, SRK made us believe that notions of romance didn’t need mustard fields, or dancing in the rain. It didn’t require fanfare, pomp or heavy dialogues, it could just be a sweet emotion that grew between two people, minus all the melodrama of a Bollywood film. Today, there’s a sense of nostalgia associated with many of his comedies with Juhi. 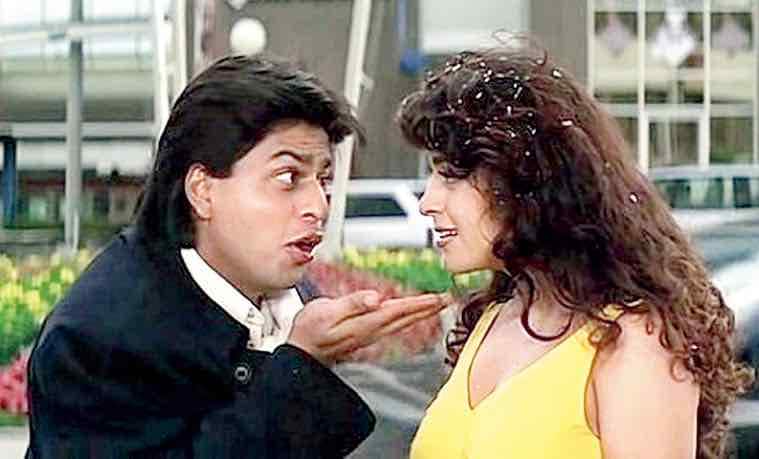 In Yes Boss, SRK plays the role of a man who engages in matchmaking for his boss, only to fall in love with the woman he chooses. There’s a comfortable build-up of their friendship, before they realise their love for each other. In Raju Ban Gaya Gentleman, Juhi Chawla sets SRK up with a job of his dreams, only to find that he is losing sight of himself in the light of his successes. The duo play rival journalists in Phir Bhi Dil Hai Hindustani, pitted against each other to break stories, and finally cominge together in the face of a dangerous crisis.

There was a quaint charm to see SRK and Juhi on screen together, combined with light, and quirky storytelling. You knew they would end up together—no doubt, but you also wanted to know where the story would take you. There was fun storytelling, with trademark 90’s songs and dances, and packed with intense action sequences, making it the complete package. In SRK and Kajol’s films, SRK became the Raj and Rahul we know today. He was cool, a romantic, who would do anything for the woman he loved. In the case of Kuch Kuch Hota Hai, he realised his feelings for his best friend eight years later in a span of four days at a summer camp after seeing her only in sarees. Unbelievable, but we swallowed it, because why not. In DDLJ, like a bloodhound he miraculously found his lovers home in the heart of Punjab, and promised to marry her, with the consent of her parents. Epitome of an overwhelming romance, we dubbed it at the time. Today, his films of romance are dissected and receive much criticism for its misogynistic notions and toxic expectations of women, and clearly, it’s no surprise why. Those films would never live through the current Twitter discourse, it would be written off at the first screening.

SRK himself noted that he never intended to be a romantic hero. He didn’t think he was lover-boy material as he was more comfortable in thrillers, action and comedy. In the latter genres, he didn’t need to force himself to smolder or whisper sweet-nothings. Perhaps, that’s why his equation with Juhi Chawla in his films seemed to be more jovial and natural, without double dose of saccharine. It was endearing, relaxing, and it gave us a good laugh too. It also helped that Juhi has a pervasive sense of comic timing.

Well, till Juhi and SRK reunite for the screens once again in a new era, we’ll just have the memories of their 90’s films to mull over.