In Saand Ki Aankh, Bhumi Pednekar will be seen as Chandro Tomar, while Taapsee Pannu will portray the role of Prakashi Tomar. The Tushar Hiranandani directorial releases on October 25. 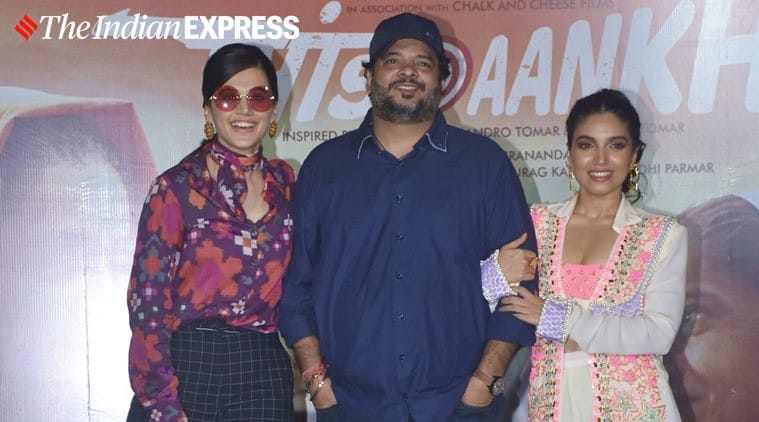 Debutant director Tushar Hiranandani says he faced a lot of difficulty while casting two leads, who would look like women in their 60s onscreen, for his film Saand Ki Aankh.

The film is the real life story of octogenarians Chandro Tomar and Prakashi Tomar of Johri village in Uttar Pradesh. The duo are among the world’s oldest sharpshooters and the winners of several national championships.

In the film, Bhumi Pednekar will be seen as Chandro Tomar, while Taapsee Pannu will portray the role of Prakashi Tomar.

“I always wanted them to play this role and I am happy they did. Actors usually play college students. You should thank and applaud them that at this age they are playing 60 year olds.

“I went to everyone in the entire industry. Every heroine was scared to take up this role. These are the only two women who had the guts to do it,” Tushar told reporters.

The filmmaker was speaking at the trailer launch of the film on Monday.

Tushar said after seeing the inspirational story of the two sharpshooters on Aamir Khan’s Satyameva Jayate, he was keen on making a film on them.

“We had to have faith to make this film. We took five years to make it and pulled it through. It is all worth it,” he added.

The director said shooting the film in the western UP village was a great experience.

“Everyone told me it would be tough to shoot there but that wasn’t the case. The entire Tomar family helped us a lot,” he added.

Also read: Taapsee Pannu: I will proudly show Saand Ki Aankh to my children one day

Prakashi Tomar, who was present at the event, said, she is happy to see their journey on screen. Her sister-in-law Chandro Tomar couldn’t accompany her as she was unwell.

“You can do whatever you like to do at whatever age you want to. Age shouldn’t be a barrier. Now that these two girls have shown our journey on-screen, I feel happy and satisfied,” she added.