Aayush Sharma recalled a funny story about how Salman Khan told him off for paying him a visit without Arpita Khan. Watch the clip from The Kapil Sharma Show here. 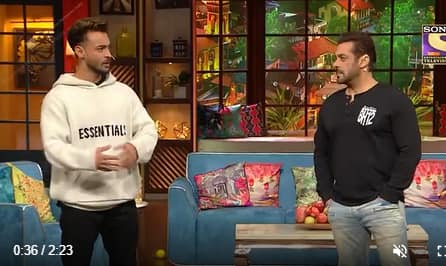 Salman Khan and his brother-in-law Aayush Sharma will appear as special guests on The Kapil Sharma Show, a new promo has revealed. The actors are promoting their upcoming film, Antim: The Final Truth, directed by Mahesh Manjrekar.

In the promo video, shared on the official Sony Entertainment Television Instagram account, Salman Khan and Aayush Sharma danced to a song from the film, before they engaged in some banter with host Kapil Sharma.

When Kapil asked Aayush if there is a difference between Salman the brother-in-law and Salman the co-star, Aayush said there is. “Every alternate day inko milne jaate hai aur hasee mazaak karke wapas aa jaate hai. Ek time hua tha Arpita ghar se bahar gayi hui thi, main Bhai ko milne aaya, Bhai ne kaha, ‘Tu ajeeb insaan hai, tu baar baar yahaan kyun aata hai?’ (We would go meet him every alternate day, and have a great time with him. One day, Arpita was not at home, and I visited Bhai. Bhai told me, ‘You are a weirdo, why do you come here again and again?’),” he said.

Salman and Aayush were joined on the show by co-star Mahima Makwana. Later, Kiku Sharda and Krushna Abhishek arrived on the scene and performed a sketch. Krushna assured Salman, who is a producer of The Kapil Sharma Show, that the programme was going well, and that Kapil was behaving himself.

Salman was last seen in the critically reviled Radhe: Your Most Wanted Bhai, which debuted on the ZeePlex pay-per-view service. After Antim, he will be seen in the third instalment of the Tiger franchise, for which he has commenced shooting with co-stars Katrina Kaif and Emraan Hashmi. He also rumoured to be appearing as Tiger in Shah Rukh Khan’s yet-to-be-announced comeback vehicle Pathan, which is reportedly set in the same universe as the Tiger films.