If the television remote clicks on Stories On The Next Page, it’s perhaps worth a look. But it does not merit active seeking in the hunt for watchable content, observes Deepa Gahlot.

The short film format has become popular with writers, directors and actors, particularly during the pandemic, and it is good to see major OTT platforms airing shorts, so that they do not disappear down the rabbit hole of copious content that audiences cannot possibly keep track of.

Stories On The Next Page is not one of the very substantial offerings but the actors somewhat redeem it.

Three stories around the theme of closure are packed into a little over 38 minutes, stories of people facing inconvenient truths about themselves.

Produced by Prateek Chakravorty (grandson of Pramod Chakravorty, hit maker of the past), and Mainak Sen (son of adman and film producer Sudeep Sen), directed by Whistling Woods alumna Brinda Mitra, who has also scripted with Senjuti Mukherjee, the best of the three stories is Reunion.

A celebrity author Angad Singh (Namit Das) is confronted by Abhinav (Bhupendra Jadawat), who, very gently, without any acrimony, reminds him of something he did in the past, that ruined his (Abhinav’s) life, or at least changed its course.

Angad does not even remember Abhinav, or pretends he does not, but has a clear memory of what he had done.

A large part of the dialogue is shot in close-ups (DOP Dezvyn Douglas Tinwalla), and the emotions flitting across Das’ face are subtly effective.

By the end of the story, it does seem as if Angad did not receive adequate punishment but the man to throw the first stone would have to be Abhinav, who has come to terms with his life.

Since, these days, taking up an LGBTQ issue is almost mandatory, the story Sunshower has Ira Iyer (Renuka Shahane) meet up with Nikhat (Rajeshwari Sachdev) on the insistence of her son Neel (Syed Raza).

Ira did not have the courage to defy society 27 years ago, and over wine and dinner, hopes to recapture what she had lost.

The two actresses, looking radiant in the candlelight flicking around the table, talk about the course of their lives.

The shots focus on their faces — Ira a little contrite, Nikhat gloating a bit — and they are seen together in the frame when they have truly reconnected.

Balloo and Mowgli is lightweight by comparison, as siblings (Abhishek Banerjee and Ditipriya Roy) are told a secret by their mother before she dies.

It’s actually not terrible for them, since the guilt was not theirs to carry, so their squabbling does seem excessive.

What makes Stories On The Next Page attractive is the production design (Anindita Somitra Chaturvedi) in two of the stories set in homes — the interiors looked so gorgeous that they distracted from the scenes.

If the television remote clicks on Stories On The Next Page, it’s perhaps worth a look. But it does not merit active seeking in the hunt for watchable content.

Stories On The Next Page is streaming on Disney + Hotstar. 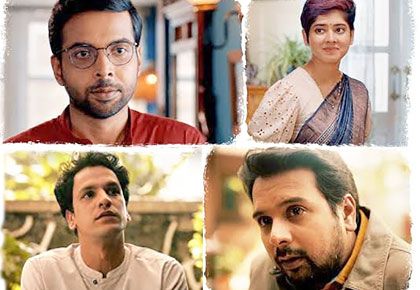