Uunchai has a simple enough story that drags on for 169 minutes and 48 seconds on the sheer good will of its veteran cast, points out Sukanya Verma.

Frail old folk overcoming physical limitations and taking on challenges beyond their capabilities for the sake of friendship is inspirational. But Sooraj R Barjatya’s Uunchai mines it for melodrama.

Back in 1989, when the debutant director highlighted young Salman Khan’s grit at overcoming hardships in Maine Pyar Kiya, it came from a place of naïve impulses.

But his insistence to romanticise 80-year-old Amitabh Bachchan’s triumph against overwhelming odds in the same vein is plain unnatural.

Uunchai forcibly draws out our emotions by playing up the octogenarian actor’s ordeal in a drama whose focus fluctuates between friendship, trekking, ageing, closures and making peace.

Goody-goody ideals have formed the core of Rajshri Production’s values for 75 years, an attribute it steadfastly upholds in Uunchai where the religious identity of a staunch Hindu (as well as liberal), a moderate Muslim and their Nepalese best friend never comes in way of their affection.

What’s disappointing is how made-up these bonds seem.

Amitabh Bachchan, Danny Denzongpa and Anupam Kher’s Hum reunion is gate-crashed by a cheerful new entrant in Boman Irani, but the camaraderie is just not there — neither on screen nor on script.

For long-time friends, they are surprisingly clueless about each other’s lives, history and health.

How does a revenue officer and hosiery seller become besties in the first place? It’s only because all four are so seasoned in their profession that Uunchai exudes an air of bonhomie and free flowing interactions.

Uunchai has a simple enough story that drags on for 169 minutes and 48 seconds on the sheer good will of its veteran cast. After the demise of their fittest friend, three elderly men from Delhi resolve to honour his last wishes and immerse his ashes in the mountains he hails from.

Craggy and covered in pristine white snow, the Himalayas are a metaphor for age and will as well as overcoming life-sized mountains. Buoyed by their buddy’s belief, Everest has answers for everything, and the senior citizen troika embark on the journey of a lifetime.

An itinerary for a trek to the Mount Everest base camp in Nepal is set as the three friends get busy building their stamina, hoodwinking one’s overprotective wife (a feisty Neena Gupta) and swallowing some bitter truths about estranged partners, extended families and parenting along the way.

If the mawkish sentimentality of these clumsily written conflicts isn’t jarring enough, shoving down Piya Ka Ghar‘s philosophical melody, Yeh Jeevan Hai as an explanation for ‘it is what it is’ makes it even worse.

If one half of Uunchai documents the difficulties of hiking on bumpy terrain and high altitude guided by tour leader Parineeti Chopra (her real life commitment to fitness reflects in her no nonsense detailing of what to expect on a tough trekking turf), the other half is an meandering road trip to Kanpur, Agra, Lucknow of foodies feasting on kachoris and imartis.

Guess it won’t be a Sooraj R Barjatya film without one elaborate scene of breakfast on the table.

Hunky-dory scenarios can get dreary even for a dove like Barjatya. To make the six-day trek eventful, he manufactures medical issues around Bachchan, gives Parineeti something to grumble about and tosses in (a wonderfully natural) Sarika’s mystery woman harbouring a secret about their late friend.

The upshot is needless delay and endless rona dhona. 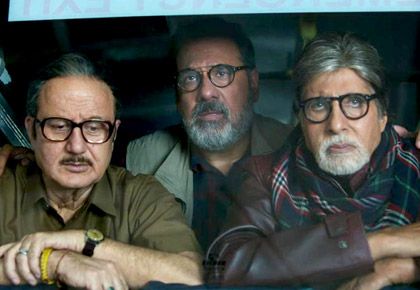