‘I feel I should do a lot of things.’
‘When you have got that chance to do that, it’s wonderful.’

Rajshri Productions’s 1975 film Geet Gaata Chal starred Sarika in one of her very first roles as an adult.

Several decades later, she returns to the banner to essay a pivotal part in Sooraj Barjatya’s Uunchai, slated to open in cinemas on November 11.

Recalling her first film with the Rajshri studio, Sarika tells Rediff.com Contributor Mohnish Singh, “During Geet Gaata Chal, I remember they shaved my eyebrows. Then they thought my forehead was very small.”

It seems to be a true homecoming for you with Rajshri Productions after Geet Gaata Chal. How excited are you?

We do not realise it, but we want to do so many things, but rarely do we get a chance to do them.

So there is a lot of gratitude that the universe gives you that chance.

I feel I should do a lot of things.

When you have got that chance to do that, it’s wonderful.

There is a lot of excitement because we have all gone through this journey and we are all very proud of what we have done because it is done with a lot of honesty, hard work and love.

Though the trailer has received a great response, a lot of people from the younger generation may ask what is there for them in the film.

People are getting caught in these age traps. They are not understanding that this film is for all ages.

I am trying my level best to make them understand that you are perceiving it wrong.

You would do the same for your friends that these people (in the film) are doing.

It has nothing to do with age except that it is difficult, but it is the same.

Uunchai is for all age groups. You return to Rajshri Productions after decades. How did you react when they approached you for Uunchai?

Actually, there was no gap in my films as a child star and heroine.

They overlapped each other.

I was still working as a child artiste when I got my first film Kaagaz Ki Nao, directed by B R Ishara, as a heroine.

I was simultaneously working for Gulzarsaab‘s film Khushboo as a child artiste.

At that time, they (Rajshri Productions) were casting for their film and Gulzarsaab told them, ‘Why don’t you screen test her for Geet Gaata Chal?’

So it was he who told them that they should screen-test me.

I was called, and I came to this same office.

I had finished Kaagaz Ki Nao by then and they screen-tested me and said ‘yes’.

I was still growing then and suddenly, you know, I put on weight.

So Gulzarsaab had to cut my role in Khushboo.

It was so bizarre because in that story — if you remember Khushboo, starring Jeetendra and Hema Malini, Jeetendra’s wife is dead and he has a son and this girl Kali (played by me) takes care of him and everybody tells him, ‘Marry for the sake of your kid.’

Hema Malini wants to marry, but he is not ready.

So suddenly I had put on weight and started looking like a woman.

Gulzarsaab said now people would say he should marry Kali, so they cut my role and I die due to some epidemic disease in the film (laughs).

That’s how I got Geet Gaata Chal.

I remember they shaved my eyebrows. Then they thought my forehead was very small, so they did threading and took out my hair. Then everybody used to call me (character actor) David Uncle! Now cut to Uunchai.

No threading, no Kali, and no Gulzarsaab cutting my role…!

They called me up, and I read the script.

I decided to do Uunchai because it was Rajshri, and it felt nice.

It is not just any production house for me.

You don’t want to go back and work with every producer you worked with. That rarely happens.

This production house is different from the others. You started acting at a young age. Did you enjoy it in your childhood?

I didn’t even know what I was doing.

I liked the people that I worked with, but I didn’t know anything about acting or what to do in life.

What will a child of five, six or seven years know?

Whatever people ask you to do, you do.

They tell you it’s good and you jump into a well.

So you don’t know anything.

I didn’t have a choice in how I lived my childhood. But I am not the one to sulk about it.

I take the best out of the worst and say it has made me what I am as an actor.

That (the film industry) was like a school, like a college, everything for me because I never went to school.

I never went to college. So this was my education as an actor.

Do you ever regret not getting a proper education?

I think it is the basic right of every child to live their childhood.

It’s not about missing; it’s about right and wrong.

It’s much more serious than missing; it’s about right and wrong. 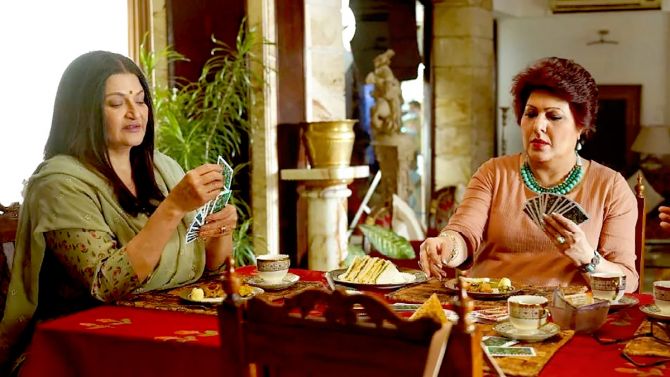 Have you ever confronted gender-related roadblocks in your career?

Of course, there is no end to how much work you can do. You could have done 50 more films, and got 50 more roles, but that’s how it is.

You keep looking for good roles, and work hard.

You seek out good roles and good directors.

When Modern Love came to me, I was really excited. I wanted to work with Alankrita Shrivastava because I liked her work.

When she came to me and said that she wanted me to do that role, I was totally on board.

That is how you work on yourself and make your own opportunities. You got a National Award for designing costumes in Hey! Ram. Why didn’t you continue as a costume designer?

If one does one job for 18 years, that’s enough. It gets repetitive.

But when it comes to acting, you never get bored of it.

You always do a new role in every film.