Beijing is using its financial might to expand its influence, eroding centuries of Russian dominance in a vast, resource-rich region. Officials in Kyrgyzstan knew they could no longer put off the decision. An aging plant that provided nearly all the heat and electricity for the country’s capital was on its last legs.

As the officials were weighing rival bids to reconstruct the plant, letters arrived at the Kyrgyz Energy Ministry and Foreign Ministry from the Chinese Embassy in Bishkek, the Kyrgyz capital. They strongly “recommended” a Chinese company called TBEA as the “only executor” for the project, worth hundreds of millions of dollars.

It was more than just a recommendation. China was dangling the prospect of a loan to Kyrgyzstan, a Central Asian nation of 6.2 million people, but made clear that its favored contractor had to be chosen. Believing they had no option, the Kyrgyz officials selected TBEA, a company with grand ambitions but modest experience in building and repairing power stations. The 2013 decision to choose TBEA over a far more experienced Russian company led to disaster. Last year, soon after the overhaul was completed, the plant broke down, leaving much of Bishkek without heat or electricity in freezing weather.

The public outcry and a trial underway in Bishkek have exposed Chinese business practices and local corruption to months of intense scrutiny from Kyrgyzstan’s boisterous news media and elected politicians. The scandal also highlights a tectonic shift underway in the economics and geopolitics of Central Asia, a vast, resource-rich expanse of desert, steppe and mountains that Russia has viewed as its turf for centuries.

Fierce rivals during the Soviet era who fought a dangerous border conflict in 1969, Russia and China settled into something of a cold peace in subsequent decades. Lately, though, the two nations have made a great show of drawing together strategically and commercially, a relationship fueled primarily by tensions with the United States and its Western allies. China’s leader, Xi Jinping, and the man he recently described as his “best friend,” President Vladimir Putin of Russia, last month traded smiles and gibes about the United States during trips to Central Asia. They both attended a meeting in Kyrgyzstan of the Shanghai Cooperation Organization, a group of regional states established by China, and then met again in neighboring Tajikistan, where Putin gave the Chinese leader a birthday gift of ice cream.

Despite the growing ties, however, a deep-seated rivalry remains between the two former adversaries, one that this case exposes.

“There is a big hidden fight going on between Russia and China for influence in Central Asia,” said Rasul Umbetaliev, a former Kyrgyz official and energy expert. Russia has more support from a Kyrgyz population that often speaks Russian and looks to Moscow as a place to work or study, he said, but “the Russians don’t have any money.”

The power of Chinese cash is at the center of the trial in Bishkek of a former Kyrgyz prime minister, Sapar Isakov, and other former officials accused of corruption relating to the TBEA contract. Prosecutors say rigged bidding and inflated pricing will cost Kyrgyzstan $111 million. 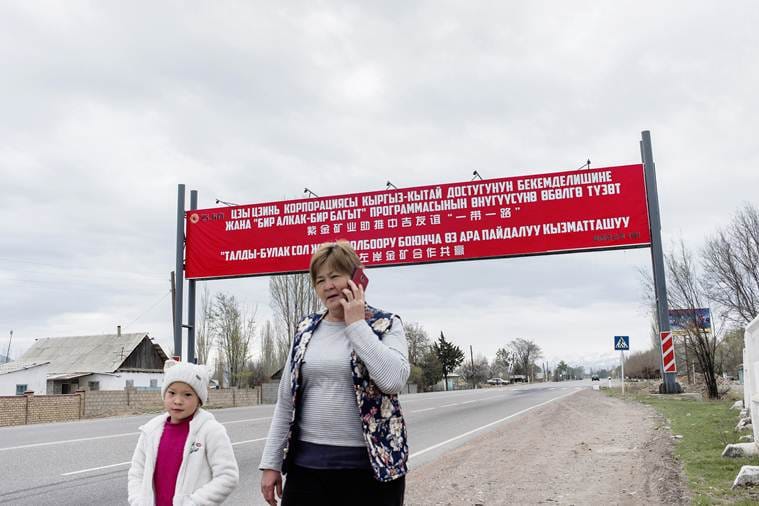 Isakov denies that there was anything untoward about the contract, and says that neither he nor any other Kyrgyz official selected TBEA. The choice was made “by the government of the PRC,” meaning the People’s Republic of China, he said in a recent statement issued from jail. That was China’s right, “since it financed the modernization project,” he said.

The statement offered a rare insider’s acknowledgment that China, with the world’s largest foreign exchange reserves, can tilt the business playing field abroad to serve its interests no matter what local residents think or rivals offer.

A commission created by the Kyrgyz Parliament found widespread irregularities in the awarding and execution of the contract. TBEA was not chosen after an open, competitive tender, but through a closed-door review of bids submitted by a few companies that had somehow learned a contract was available. 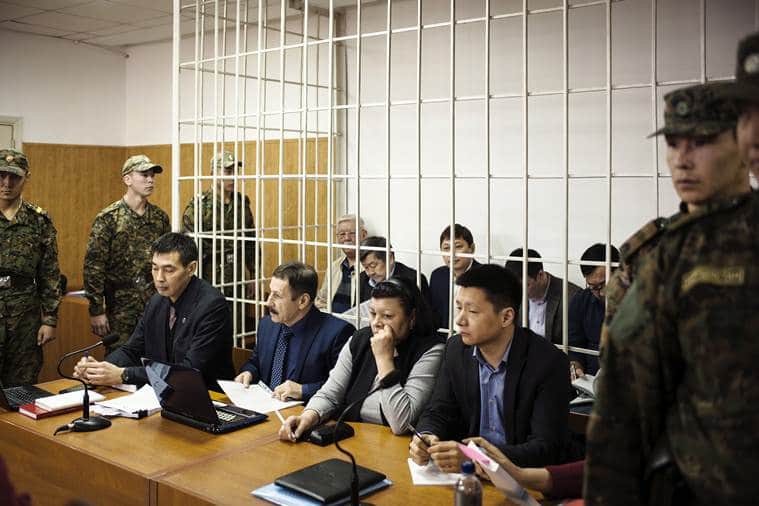 Iskhak Masaliev, an opposition lawmaker on the parliamentary commission, says he believes that TBEA’s Russian rival, Inter RAO, never stood a chance. “The whole project smelled bad from the start, but if there had not been an accident, nobody would have noticed,” he said.

Xiao Qinghua, China’s former ambassador to Kyrgyzstan, told the Kyrgyz news media that TBEA had been selected because it was an “authoritative” company with a “good global reputation.” He declined to comment on the findings of the Kyrgyz investigations.

“We do not interfere with them,” he said. “We respect the sovereignty of Kyrgyzstan.” TBEA’s head office in China did not respond to repeated requests for comment.

The power plant fiasco, the persistent troubles of a Chinese-funded refinery and Kyrgyz anger over China’s oppression of the Uighurs, a fellow Turkic Muslim people, have curbed Beijing’s ambitions somewhat, at least temporarily.

But Russia has struggled to compete in what has become a new version of the Great Game, the 19th-century struggle over Central Asia between Russia and Britain. Citing Russia’s “unfavorable economic situation” and inability to provide promised funding, Kyrgyzstan in 2016 scrapped an agreement to allow Russian companies to build a series of dams and hydroelectric plants in the north of the country.

Russia still has large reserves of good will in the former Soviet republics, and it remains the region’s dominant security player. On a visit to Kyrgyzstan in March, Putin secured an agreement to expand an air base that Russian military forces have used since the Soviet era.

But when it comes to building roads, refineries and power lines, China has left Russia far behind.

Central Asia is a crucial part of China’s Belt and Road Initiative, the signature policy of Xi, who announced the gigantic infrastructure program on a visit to Kazakhstan in September 2013. Days later, Xi traveled to neighboring Kyrgyzstan and told officials in Bishkek that the Export-Import Bank of China could finance the reconstruction of the capital’s aging heating and electricity plant.

The bank’s loans to Kyrgyzstan, just $9 million in 2008, have ballooned to more than $1.7 billion. Some estimates put the value of infrastructure projects financed by China at $2.2 billion, almost a third of the value of Kyrgyzstan’s annual economic output.

Xi’s intervention turned the Bishkek power plant into an early test of Belt and Road. Anxious that Kyrgyz officials were not moving faster, the Chinese Embassy prodded them in November 2013 to get the project started, repeating the insistence that TBEA do the work and stressing that “this is the final position of the Chinese side.”

The loan offer, the embassy said in a letter to the Kyrgyz Ministry of Energy and Industry, “was one of the fundamental results of the first visit by the head of the Chinese state and gave important meaning to the development of an energy project so significant for the Kyrgyz economy.”

Nurlan Omurkul, who was chief of the plant, said he had harbored strong doubts about hiring a company with no track record of building power stations, but he had been badgered by senior Kyrgyz officials to endorse a decision that he said had obviously already been made.

Omurkul was fired after the breakdown last year, charged with negligence and sentenced last month to four years in prison. In an interview before his conviction, he said the case against him and other technical experts had been a smoke screen to hide corruption by senior officials.

“I’ve worked my whole life in power and heating plants and knew all along that the Chinese price of $386 million was too expensive,” he said. Kyrgyzstan will pay about $470 million over 20 years, including interest and fees.

Another Chinese company, China Machinery Engineering Corp., offered a lower bid, $356 million, the parliamentary commission said in its report. But the Chinese Embassy insisted that its offer be dismissed. It is not clear why Chinese diplomats took sides so forcefully, but TBEA is based in Xinjiang, the Western region whose economic development is a priority for Beijing.

The losing Russian bidder, Inter RAO, bid $518 million, but for very different terms. Rather than require Kyrgyzstan to borrow, the Russian company offered to invest its own money to build an entirely new plant in return for partial ownership and a share of future revenue.

The minutes of government meetings about the project show that some Kyrgyz experts favored the Russian proposal, while others favored the cheaper Chinese option. But those views made no headway against the Chinese Embassy’s unequivocal support for TBEA.

Omurkul, the fired plant director, said he began to fathom why TBEA’s price was so high after he started receiving reports listing items like $1,600 for fire extinguishers, $320 for pliers and tens of millions of dollars in unspecified consulting fees.

Masaliev, the lawmaker on the parliamentary investigating commission, said that for all the strong-arm tactics of the Chinese, he believes it was Kyrgyz officials who were siphoning money off the project.

The son of a senior Communist Party official during the Soviet era, Masaliev has known and worked with Russians for decades. But China, about which he knows little except that it has a lot of money and people, makes him nervous.

“Of course we are afraid,” he said. “A small Chinese town has more people in it than our entire population.”