Although still unpredictable, the cleric is consistently an Iraqi nationalist and now seems to be emerging as an arm’s-length US ally, helping the United States by preventing Iraq from tilting further into Iran’s axis. 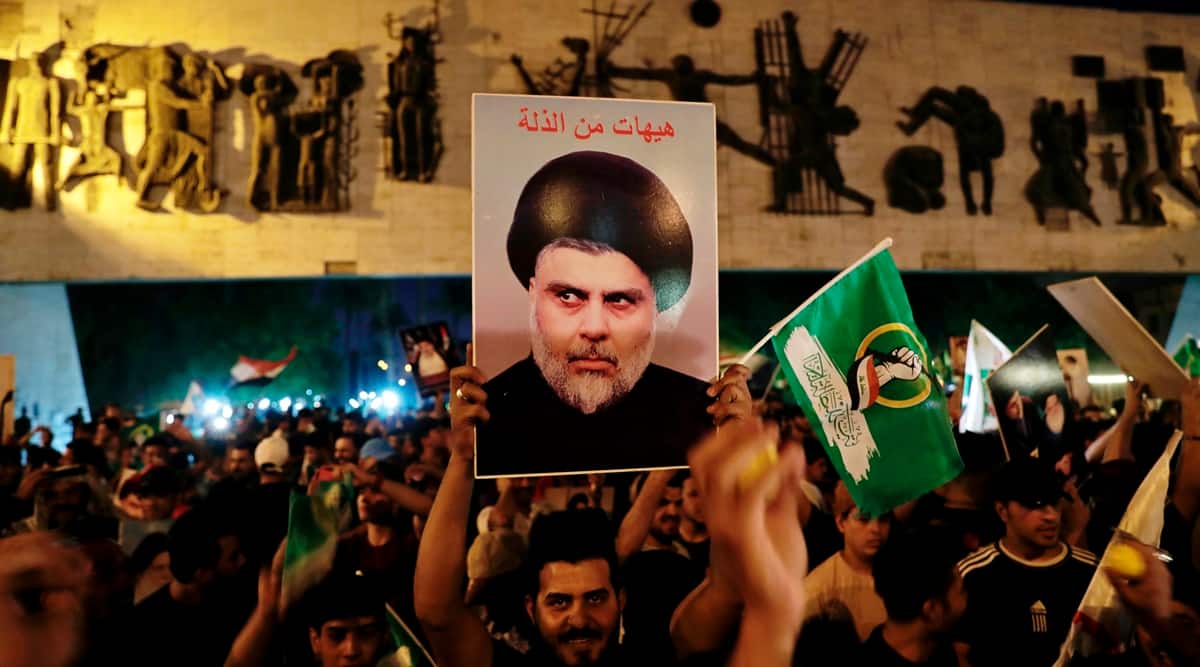 Standing at a lectern with an Iraqi flag by his side, cleric Muqtada al-Sadr looked the part of a statesman as he read a postelection address.

In the 18 years since he formed the Mahdi Army militia to battle occupying U.S. forces, the one-time firebrand has refined his delivery. His formal Arabic is more proficient and his voice more assured. Looking up to address the camera, he raised a finger in emphasis in remarks carefully crafted to send messages to both the United States and Iran after his party picked up seats in this past week’s parliamentary election.

In 2004, as al-Sadr’s fighters took on U.S. forces with rifles and rocket-propelled grenades in Baghdad and across the southern provinces, the United States pledged to kill or capture the Shiite cleric.

Next to al-Qaida, he posed the biggest threat to the U.S. occupation in Iraq, miring U.S. troops in fighting in the streets and alleys of Iraqi cities as the military fought both Sunni and Shiite-based insurgencies.

Although still unpredictable, the cleric is consistently an Iraqi nationalist and now seems to be emerging as an arm’s-length U.S. ally, helping the United States by preventing Iraq from tilting further into Iran’s axis.

“All embassies are welcome, as long as they do not interfere in Iraqi affairs and government formation,” al-Sadr said in a reference aimed at the United States, whose embassy was stormed two years ago by what were believed to be members of Kitaib Hezbollah, one of the biggest Iranian-backed Iraqi militias. “Iraq is for Iraqis only.”

In preliminary results from last Sunday’s elections, the Sadrist Movement gained roughly 20 seats, giving it up to 73 seats in the 329-member Parliament. That leaves al-Sadr with the biggest single bloc in Parliament and a decisive voice in choosing the next Iraqi prime minister.

In his remarks, the cleric made a pointed reference to Iranian-backed militias, some of which have grown more powerful than Iraq’s official security forces and pose a threat to the United States in Iraq.

“From now on, arms must be restricted in the hands of the state,” he said in the address, broadcast on Iraqi state television. “The use of weapons shall be prevented outside of the state’s framework.” Even for those claiming to be the “resistance” to the U.S. presence, he said, “it is time for the people to live in peace, without occupation, terrorism, militias, kidnapping and fear.”

The self-styled resistance groups are the same Iranian-backed militias that launched drone and rocket attacks on the U.S. Embassy and U.S. military bases after the U.S. killing of a leading Iranian commander, Gen. Qassem Soleimani, and a senior Iraqi security official in Baghdad last year.

An aide to the Shiite cleric said disarming groups that are not under government control would also apply to al-Sadr’s own militia forces.

“No country wants forces that are stronger than its army,” said Dhia al-Assadi, a former top official in the cleric’s political movement. He said al-Sadr would leave it to the incoming government to decide whether U.S. forces should remain in Iraq.

The United States has agreed to withdraw all combat troops from the country by Dec. 31, although Washington does not consider its troops there currently to be on a combat mission. Under that agreement, the number of U.S. forces — about 2,000 in Iraq at Baghdad’s invitation — is expected to remain the same.

“That is labeling or classifying the troops as trainers and not fighters,” said al-Assadi, who served as the head of al-Sadr’s former Ahrar political bloc. “The decision should be revisited again and decided by Parliament and the government.”

Al-Assadi said he does not foresee any change in an existing ban on senior officials of the Sadrist Movement from meeting with U.S. or British officials.

Once a fierce sectarian defender of Iraq’s Shiite majority, al-Sadr has expanded his reach in recent years, reaching out to Sunnis, Christians and other minorities. After telling his followers to protect Christians, young men from Sadr’s stronghold in the mostly Shiite neighborhood of Baghdad’s Sadr City began wearing large crosses around their necks in a sign of solidarity. In a previous election, the Sadrists formed an alliance with the Communist Party, which is officially atheist.

Externally, he has fostered relations with Saudi Arabia and the United Arab Emirates at a time when those countries’ Sunni Arab rulers were hostile to Iraq’s Shiite-led government. Domestically, one of his main demands is to clean up Iraq’s dysfunctional and deeply corrupt political system, which appoints people to senior government posts on the basis of party loyalty rather than competence.

Al-Sadr, 47, is the youngest son of a revered cleric, Grand Ayatollah Mohammad Sadeq al-Sadr, who was assassinated by Saddam Hussein in 1999 after demanding religious freedom for Iraq’s Shiites. The Sadr family commands the loyalty of millions, many of them poor and disposed, most of whom believe his election win was ordained by God.

The Mahdi Army has been blamed for fueling Iraq’s past sectarian violence. As it battled with Sunni fighters of al-Qaida for supremacy in Iraq between 2006 and 2008, al-Sadr’s fighters were accused of running death squads and conducting sectarian cleansings of Baghdad neighborhoods.

Al-Sadr has said that not all the fighters were under his control.

In 2008, after losing a fight with Iraqi government forces for control of Basra, al-Sadr — who lacks the religious credentials of his father — abruptly left for Iran to pursue his theological studies.

Yet he has long had an uneasy relationship with Iran, and while he cannot afford to antagonize its leaders, he advocates an Iraq free of both Iranian and American influence.

“I think he has his own space in which he walks, and his base is not dictated by any country, especially not the Iranians,” said Elie Abouaoun, a director at the U.S. Institute of Peace, a U.S. government-funded think tank. “I think that he is much less sectarian than many, many others because he has a nationalist vision of Iraq.”