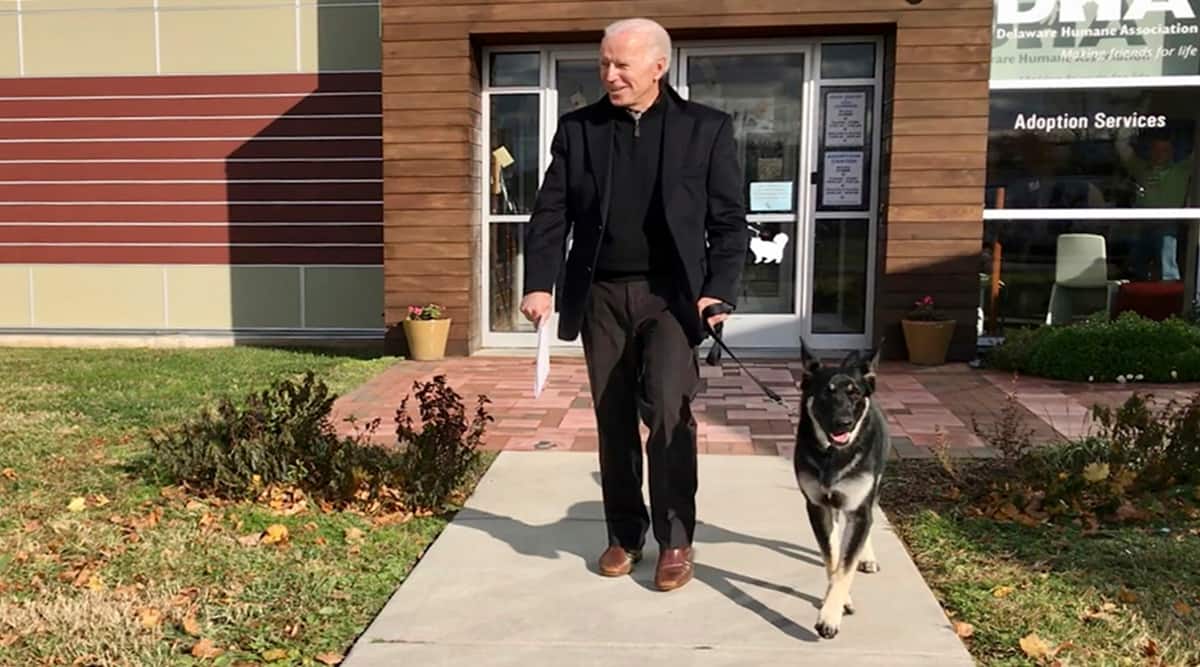 The Biden campaign approached artist Lorraine O’Grady in August. O’Grady had used empty, golden frames to capture the joys of community togetherness at the 1983 African-American Day Parade in Harlem, framing the people as art. The event was preserved in photographs.

Inspired by the kind of unity O’Grady’s project conveyed, the Democratic candidate’s campaign sought to borrow her concept for a similar message, intended to ease a divided nation. This is how, two months before the election, with O’Grady’s blessing, the campaign created a two-minute film. It landed on the internet Saturday, shortly after the networks projected a victory for Joe Biden and Kamala Harris.

It opens with a rendition of “America the Beautiful” by Ray Charles as the camera pans countryside vistas and the Philadelphia skyline. Person after person is captured inside the shiny frames as Americans celebrate the diversity of a country that includes musicians and fishermen, hairdressers and surfers.

“The translation of my ideas is almost direct,” O’Grady said in an interview.

“Biden is saying the same thing to the country that I was saying to the art world,” she said. “We are a very large and diverse community and we all need to be included.” Grady, who is 86, and the descendant of Jamaican immigrants, taught dadaism and futurism at the School of Visual Arts in New York, and became known for her avant-garde conceptual work.

She said on her website that she created “Art Is …” in answer to an acquaintance who noted “avant-garde art doesn’t have anything to do with Black people.” O’Grady decided to bring avant-garde art into the largest Black space she could think of, the 1 million or more people at the parade. “The concept was that, as people were being framed, they were being acknowledged as art in themselves,” she said.

It’s rare for presidential campaigns to unveil new promotional materials after an election has already been won. The video, which has been viewed more than 39 million times on Twitter, was posted on the Biden website and the campaign’s social media channels as a clear indicator that the president-elect recognizes how deeply partisan rancor has split the country he is charged with leading.

“Normally I can say that there are a lot of historical precedents, but I really struggle to find an example of this kind of political messaging once the campaign ends,” said Kathryn Brownell, a historian at Purdue University who researches political advertising. “This seems to highlight the challenge that President-elect Biden faces in trying to unify the country in a media landscape that’s divided, polarized and partisan.”

According to the artist, campaign officials said they were inspired by her 1983 performance, called “Art Is…,” after having see photographs of the work in last year’s exhibition, “Soul of a Nation: Art in the Age of Black Power,” at the Broad Museum in Los Angeles.

One of them, Andrew Gauthier, the Biden campaign’s video director, said he found the work powerful. “I remember tearing up a bit afterward,” he said in an interview. Gauthier said that creating the promotion involved more than 20 videographers across the country and three producers. The campaign would not disclose how much the video cost and said the plan was to keep it on social media channels and not the paid airwaves.

O’Grady, who has been busy — a book of her collected writings was recently published and she has been preparing for a retrospective at the Brooklyn Museum — was not directly involved in filming the promotion. However, Alexander Gray Associates, the gallery that represents the artist, did provide some feedback to the campaign by calling attention to the many landscapes of Harlem included in the original work, which was O’Grady’s nod to the history of landscape painting. The artist’s concept is directly referred to in the Biden video by a character who snaps her own images of a Los Angeles neighborhood.

“A piece like this is so easy for advertisers to appropriate,” said the dealer Alexander Gray, who said he appreciated that the campaign had recognized O’Grady as the creator of the concept.

Throughout the campaign, Biden received support from celebrated visual artists. Carrie Mae Weems, Ed Ruscha and Shepard Fairey were among those who contributed art to an advocacy campaign over the summer aimed at inspiring voters to reject the current presidential administration. Many of the artworks incorporated the refrain “Enough of Trump” into their displays. Ruscha said, in an interview in July, “This is my way of throwing my hat in the ring, and it’s because I don’t see any social progress in these last four years.”

The work that inspired the video, “Art Is …,” has become O’Grady’s defining piece. The original staging involved bringing ornate picture frames to Harlem’s African-American Day parade and having attendees pose inside them. Fifteen actors wearing white helped stage the work, which is now remembered primarily through the photographs that documented the event. Those pictures are regarded as a celebration of Black joy and depict neighborhood residents partying and posing for the camera.

“The whole task was to bring an awareness to the segregated, lily-white art world,” O’Grady explained. “Here are people capable of responding to avant-garde art — and this was way before selfies.”