Chuck Schumer announced Wednesday that he intends to bring repeal legislation to the Senate floor this year. 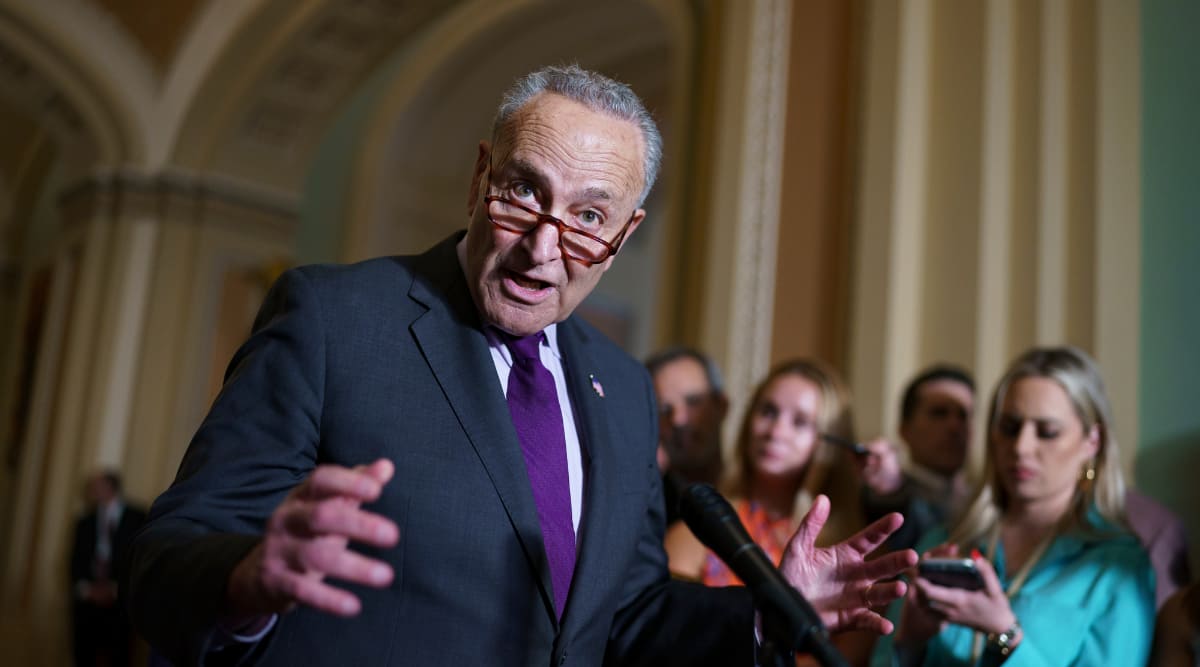 The White House and Senate Majority Leader Chuck Schumer are endorsing efforts to terminate the 2002 authorization of military force against Iraq, a step that supporters say is necessary to constrain presidential war powers even though it is unlikely to affect U.S. military operations around the world.

Schumer announced Wednesday that he intends to bring repeal legislation to the Senate floor this year.

“The Iraq War has been over for nearly a decade,” Schumer said. “The authorization passed in 2002 is no longer necessary in 2021.”

The White House said in a statement earlier this week that it supports the legislation, which the House is expected to pass on Thursday, and stressed that no ongoing military activities are reliant on the 2002 authorization. It also said that President Joe Biden is committed to working with Congress to replace outdated authorizations of military force with narrower frameworks designed to ensure the U.S. can protect Americans from terrorist threats.

The growing momentum behind the repeal measure comes after years of debate over whether Congress has ceded too much of its war-making authority to the White House. Many lawmakers, particularly Democrats, say passage of the 2002 authorization was a mistake, and some Republicans agree the authority should be taken off the books. Some lawmakers say the 2001 resolution to fight terrorism, passed after the 9/11 attacks, should be reexamined as well.

Schumer said he wanted to be clear that legislation terminating the use of force in Iraq does not mean the U.S. is abandoning the country and the shared fight against the Islamic State group. He said the measure would eliminate the possibility of a future administration “reaching back into the legal dustbin to use it as a justification for military adventurism.”

He cited the Washington-directed drone strike that killed Iranian Gen. Qassim Soleimani in January 2020 as an example.

The Trump administration said Soleimani was plotting a series of attacks that endangered many American troops and officials across the Middle East. Then-national security adviser Robert O’Brien told reporters that Trump exercised America’s right to self-defense and that the strike was a fully authorized action under the 2002 authorization to use military force.

“There is no good reason to allow this legal authority to persist in case another reckless commander in chief tries the same trick in the future,” Schumer said.

Sen. Bob Menendez, D-N.J., the chair of the Senate Foreign Relations Committee, said Wednesday in a joint statement with Sens. Tim Kaine, D-Va., and Todd Young, R-Ind., that the committee would take up legislation to repeal not only the 2002 authorization, but also the 1991 authorization for use of force in Iraq, which remains on the books.

The 1991 authorization gave then-President George H.W. Bush the authority to use force against Iraq to enforce a series of U.N. Security Council resolutions passed in response to Iraq’s invasion of Kuwait. The 2002 authorization was directed against Saddam Hussein’s regime as “necessary and appropriate” to “defend U.S. national security against the continuing threat posed by Iraq” and to “enforce all relevant Security Council resolutions regarding Iraq.”

“Repealing the 1991 and 2002 AUMFs will also send a clear diplomatic signal that the United States is no longer an adversary of Iraq, but a partner,” Young said.

The House legislation to repeal the 2002 authorization of military force against Iraq is sponsored by Rep. Barbara Lee, D-Calif. The two chambers would have to work out any differences in their two bills and vote on a final product before it can go to Biden’s desk to be signed into law.

In the end, legislation terminating the 2002 authorization will need 60 votes in an evenly divided Senate to overcome any procedural hurdles. Sen. James Inhofe, the ranking Republican on the Senate Armed Services Committee, said he opposes the effort to terminate the authorization.

“We used it to get Soleimani, and there might be another Soleimani out there,” Inhofe said.

Republican Rep. Michael McCaul of Texas will speak against the House bill on Thursday. He said a serious reform effort, “which we all agree is needed,” would have included discussions with national security leaders and a replacement to address the evolving war on terrorism.

“Democrats are playing politics with national security in an effort to taint one of President Trump’s biggest national security successes,” said McCaul, the lead Republican on the House Committee on Foreign Affairs.