Several thousand joined the rally for government workers in solidarity with protesters who have called for greater rights and government accountability over the past two months. 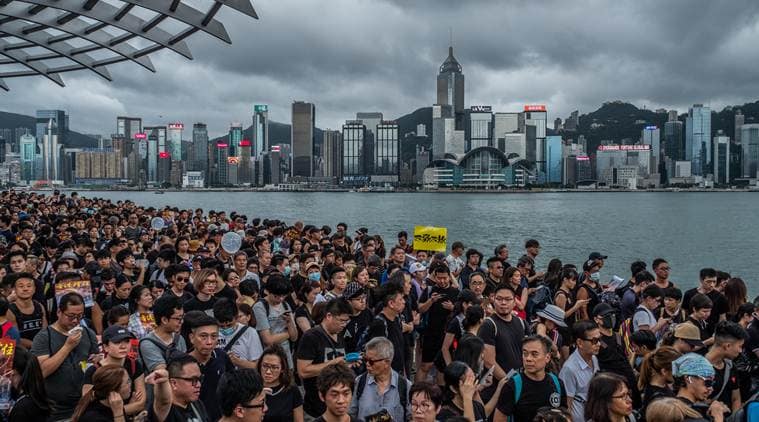 Several thousand joined the rally for government workers in solidarity with protesters who have called for greater rights and government accountability over the past two months.

“As civil servants, if we don’t stand up, that means we are disloyal,” said K H Wu, a retiree who worked for the government’s Census Department for 40 years. “Our loyalties are not to a particular government, but to the people.” Wu attended the rally with his wife, also a civil servant.

He said this was the first time he participated in a rally in which he openly shared his status as a former government worker.

He said he did so because he feels “there’s nothing to be afraid of. “Right now the Hong Kong government is blindly leading the people,” Wu said.

“They disregard the needs of the population. With Hong Kong like this right now, you have to rid yourself of all fear.”

Officials had warned civil servants ahead of the rally they could be disciplined if they showed partiality or criticized special officials and polices. The increased risk was written into posters about the event, which cautioned participants against calling for the resignation of government officials, expressing anything related to Hong Kong independence and accepting donations.

As the crowd flooded into the streets, demonstrators held up signs saying “We are civil servants and willing to step up!” and “Political neutrality does not equal conscienceless.” About a thousand medical workers participated in a rally Friday in another part of the city.

In recent days, representatives of the financial and medical sectors have also held rallies to show their support for protesters.

More protests are planned for this weekend, fed by anger over the government’s refusal to communicate, violent tactics used by police — along with accusations those tactics were in coordination with organized crime figures — and the arrest of 44 people this week on rioting charges, which carry a maximum penalty of 10 years imprisonment.

Meanwhile, China’s top diplomat was quoted by the state Xinhua News Agency on Friday accusing the U.S. and other Western nations of arranging meetings between high-level officials and protest leaders and encouraging their actions.

“The US and some other Western governments … are constantly fanning the flames of the situation in Hong Kong,” State Councilor Yang Jiechi said.

His remarks follow statements earlier this week by a former Hong Kong official that the US and self-governing democratic Taiwan were behind the unrest, sparked originally by Hong Kong’s now-suspended attempt to push through legislation that could allow some criminal suspects to be sent to mainland China.

Hong Kong Chief Executive Carrie Lam and other Chinese officials and diplomats have similarly claimed without providing evidence that “western forces” are behind the protests, while the head of the police union was quoted by Chinese media on Friday as calling for an investigation into the alleged US role in the protests.

Asked for details on the Chinese allegations, Foreign Ministry spokeswoman Hua Chunying pointed to what she called “irresponsible statements” by US politicians and meetings between Hong Kong opposition figures and US Vice President Mike Pence, Secretary of State Mike Pompeo and House of Representatives Speaker Nancy Pelosi.

Pompeo this week described the claim of an American guiding hand directing the protests as “ludicrous on its face.”

“I think the protests are solely the responsibility of the people of Hong Kong,” Pompeo said.

The US Embassy in Beijing followed that up with a statement saying, “It is not credible to think millions of people are being manipulated to stand for a free and open society.”

However, asked about the protests on Thursday, President Donald Trump echoed Beijing in labeling them “riots” and indicated the US. would stay out of a matter he considered to be “between Hong Kong and China.” Beijing has a long history of blaming the unrest on shadowy foreign anti-China forces, including in the 1989 pro-democracy protests centered on Beijing’s Tiananmen Square that were bloodily suppressed by the military, and during an earlier round of pro-democracy protests in Hong Kong in 2014.

That feeds into a narrative widely followed by mainland Chinese that the West and especially America is trying to contain and suppress their country’s rise to economic and diplomatic prominence by sowing internal social and political discord.