A total of 344 people are missing, while 12,268 people were injured, authorities said. The disaster followed a devastating temblor in 2010 that killed tens of thousands of people. Families gathered in villages in southwestern Haiti this weekend for church and funeral services a week after an earthquake battered the region, killing more than 2,200 people and destroying tens of thousands of buildings.

The collapse of churches in some of the worst-affected towns and villages of the impoverished Caribbean nation left residents to grieve in open fields.

At the Paroisse Saint-Joseph de Simon Roman Catholic church on the outskirts of Les Cayes, a southwestern city that bore the brunt of the quake, about 200 worshipers gathered early for the first Sunday Mass since the disaster.

“Everyone was crying today for what they had lost,” said the priest, Marc Orel Saël. “And everyone is stressed because the Earth is still shaking,” he added, referring to near-daily aftershocks that have rattled nerves all week. The quake struck Haiti amid a period of political upheaval following the assassination of President Jovenel Moise last month.

Allegations in a report by a local human rights group stirred new ferment on the weekend.The report by the National Human Rights Defense Network (RNDDH) into Moise’s killing alleged that new Prime Minister Ariel Henry had spoken on the night of the assassination by telephone to one of the main suspects, Joseph Felix Badio.

Jean-Junior Joseph, a close aide to Henry, wrote on Twitter on Saturday afternoon that the prime minister had told him he had “never spoken” to Badio, a former Haitian official. Last Saturday’s quake claimed the lives of at least 2,207 people.

A total of 344 people are missing, while 12,268 people were injured, authorities said. The disaster followed a devastating temblor in 2010 that killed tens of thousands of people.

Recovery efforts have been impeded by flooding and damage to access roads, feeding tensions in some of the hardest-hit areas. Exasperation over delays in assistance began to boil over in recent days, with residents looting aid trucks in several towns across the south, stirring concerns about security.

On Sunday evening, the French Embassy in Haiti said 40 French rescue workers had arrived, bringing a water treatment unit to Les Cayes that will provide up to 220,000 liters (220 cubic metres) of drinking water a day.

In the village of Marceline, dozens of mourners dressed in elegant black or white suits gathered in front of a damaged Catholic school to hold a funeral service for four members of the same family who died in the magnitude 7.2 quake.

Men and women wept on Saturday over the four white coffins: three small ones for the children and a larger one for the family’s matriarch, 90-year-old Marie Rose Morin. 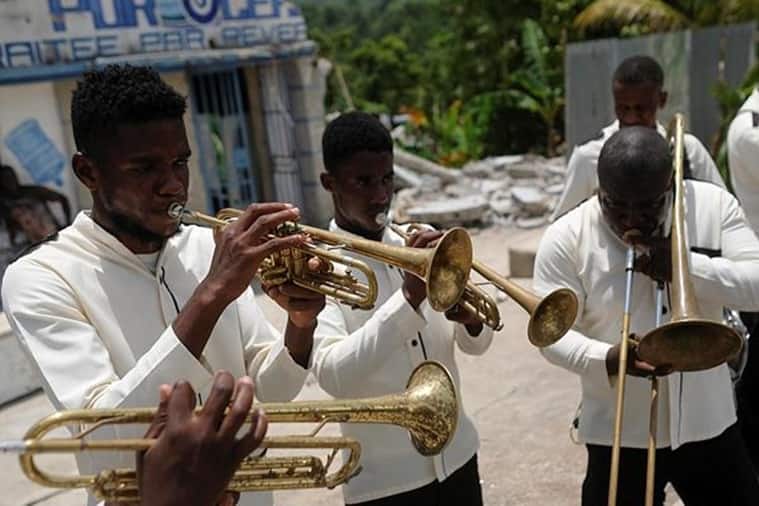 “I’m distraught looking at these coffins,” said Edouard Morin, her son. Morin was also burying his daughter, Kelly, 15, his niece Wood-Langie, 10, and his nephew Carl-Handy, 4. “I would feel better if I were being buried in the same grave as my mother,” he said. The four-way funeral cost $1,750, a huge sum for farmers in rural parts of a nation where per-capita gross domestic product is less than $1,200, according to World Bank data.

Franck Morin, Wood-Langie’s father, recalled how he had left for work as a driver only minutes before the ground began to shake. He rushed back, only to find his wife bleeding from her legs and sobbing in front of the heap that was once their home.

The two of them dug through the rubble for two days until they found their daughter’s body. “She was loved by the whole community, she was always dancing in church,” said Morin.

Outside another Catholic church overlooking the main park in Les Cayes, dozens of worshipers gathered for Sunday Mass in the
yard adjacent to the damaged cathedral.

“Let’s go fulfill the work of the Lord,” the priest intoned as he closed the ceremony.