Climate change rose to the top of Germany’s political agenda over the summer, following the deadly floods that hit western Germany in July and which experts say will become more likely if global warming continues. Germans go to the polls on Sunday to elect a new parliament and produce a new German leader after 16 years of having Angela Merkel at the helm. Merkel decided not to run for a fifth term and the election campaign has largely focused on the three candidates hoping to succeed her.

Here is a look at the highs, the lows and the unexpected that happened during Germany’s latest campaign:

Climate change rose to the top of Germany’s political agenda over the summer, following the deadly floods that hit western Germany in July and which experts say will become more likely if global warming continues.

The issue was hotly discussed during the televised election debates, with the three main candidates staking out different plans to tackle climate change. While Merkel’s center-right Union bloc and its main candidate, Armin Laschet, want to focus on technological solutions, the center-left Social Democrats under current Finance Minister Olaf Scholz emphasized the need to protect jobs from being lost as Europe’s biggest economy tilts toward a carbon-neutral future.

The Greens, who have made the issue their core campaign topic, pledged to do everything to put Germany on course to meet the goals of the Paris climate accord. They want to achieve that by ramping up carbon prices, requiring solar panels on all new public buildings and ending the use of coal eight years earlier than planned.

Foreign policy, including the future of the European Union, received comparatively little attention during the campaign. Although Berlin’s allies have long called for Germany to show more leadership on the international stage, the three candidates shied away from presenting any radical foreign policy visions. 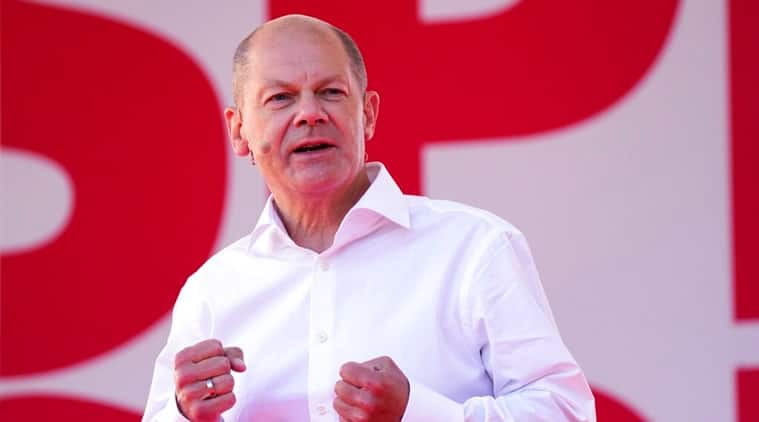 Migration has also slipped down the list of priorities for voters compared to the 2017 election, when the far-right Alternative for Germany party came third. Its co-leader said recently that the party is focusing on state elections in the east, where polls suggest it could also win several constituencies on Sunday.

One image that will remain in many voters’ minds is that of Laschet laughing in the background during a somber visit by Germany’s president to the flood region. Laschet, who is governor of the hard-hit state of North Rhine-Westphalia, later expressed regret for the incident.

The 60-year-old has also come under fire for a campaign ad showing him chummily chatting with a member of the Querdenken movement that’s opposed to coronavirus restrictions. Rivals said the ad was in bad taste following the killing of a gas station clerk by a man who refused to wear a mask.

Both the Green party’s candidate, Annalena Baerbock, and the Union bloc’s Laschet were left red-faced by revelations that they had been economical with crediting the sources they drew on for their books.

The mistakes provided a further boost for Scholz, whose curt, no-nonsense image helped push his party to the front of the polls a month before the election. The three candidates arguably faced the toughest questions from two 10-year-olds who interviewed them in a play tent filled with toys.

While Baerbock struggled to explain her green tax policies to the children, Laschet raised eyebrows by defending his cigarillo habit with the words: “I don’t inhale.”

Scholz was forced to explain to his young interviewers why the German government hasn’t done more to stop migrants, including children, from drowning in the Mediterranean Sea on their way to Europe.

A mock election by 250,000 students under 18 in schools across Germany showed a narrow victory for the Greens, ahead of the Social Democrats and Merkel’s Union bloc. In practice, however, German elections are heavily skewed toward older generations. First-time voters will make up less than 5% of the electorate of 60.4 million people on Sunday.

What have Jamaica and Kenya got to do with the German election?

Because each party in Germany is associated with a particular color, the two countries’ flags are widely used as shorthand to denote two of the dizzying array of coalition options that come into play after the election.

Others include the “Germany” coalition, a “traffic light” alliance and one known as “red-red-green” because the Social Democrats and the Left party both claim slightly different shade of red.

Aside from the national election, voters in Berlin and the northeastern state of Mecklenburg-Western Pomerania will also choose new regional assemblies Sunday. The Social Democrats are polling strongly there and some experts say the party could be in for a triple win.

Opinion polls show smaller parties are getting more support than during many previous German elections, sapping votes from larger rivals and making forming a governing coalition harder. One tiny party that could enter the German parliament again for the first time since 1949 is the South Schleswig Voters’ Association, or SSW. Election authorities say as a party representing the Danish minority in Germany it doesn’t need to meet the usual 5% vote threshold.

…And a big one

Whoever wins Sunday’s election, experts say Germany’s next parliament will likely be bigger than ever. Election rules mean the current 709-seat Bundestag could grow to 800 seats or more, making it even more unwieldy than it already is.