Radio Television Hong Kong was once compared to the BBC for its fierce editorial independence. But under a sweeping national security law that Beijing imposed last year to silence dissent, many say it now more closely resembles China Central Television, the propagandistic Chinese state broadcaster. 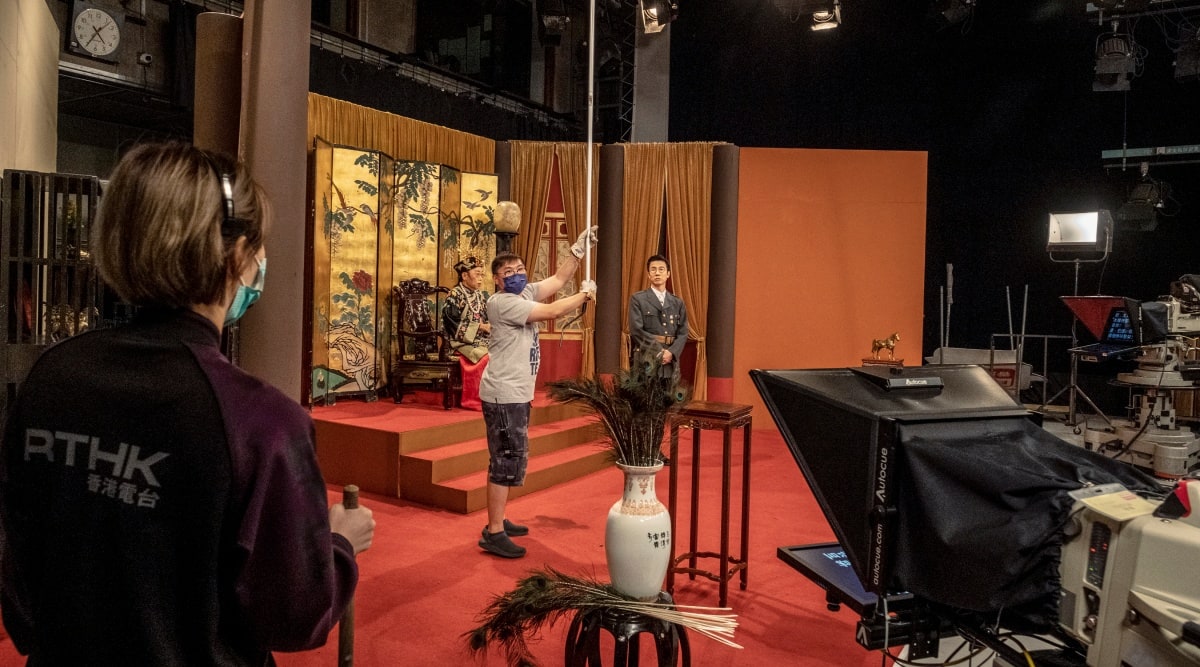 Not long after Patrick Li took over as the government-appointed director of Hong Kong’s public broadcaster, a digital lock pad appeared outside his office entrance.

In the past, the director’s office had been where staff members at the broadcaster, Radio Television Hong Kong, gathered to air grievances with management decisions: programming changes, labor disputes. Now, the lock pad signaled, such complaints were no longer welcome.

For many employees, the closed room was an emblem of the broader transformation sweeping through RTHK, the 93-year-old institution venerated by residents as one of the most trusted news sources in Hong Kong’s once freewheeling media landscape.

RTHK was once compared to the BBC for its fierce editorial independence. But under a sweeping national security law that Beijing imposed last year to silence dissent, many say it now more closely resembles China Central Television, the propagandistic Chinese state broadcaster.

Since Li arrived in March, episodes featuring interviews with government critics have been dropped hours before they were to air. Historical dramas about the Chinese Communist Party fill prime-time slots. Whole shows have been eliminated — with hosts told this would be their last taping only after they recorded it. New editorial guidelines issued in September order staff members to “assist in the promotion” of the government’s work “on safeguarding national security.” They are also to “be cautious in contacts” with foreign governments and “political organizations.”

The directives come as President Xi Jinping of China tightens his iron grip, most notably at a high-level Communist Party meeting this week in Beijing that exalted his leadership and strengthened his potential to retain control for many years.

Carrie Lam, Hong Kong’s chief executive, has praised Li for doing “exactly what I expect from a chief editor.” Soon afterward, Lam announced that she had been given her own RTHK talk show.

RTHK, which doggedly investigated official misconduct during anti-government protests in 2019, was long expected to come under pressure. Under the security law — imposed to quell the protests — officials have dismantled Hong Kong’s civil society and attacked media outlets deemed unfriendly.

Still, a dozen current and former staff members, some of whom spoke on condition of anonymity, said they were astonished by the speed and boldness of the changes — not least because of the broadcaster’s history of fending off incursions on its independence.

“In the past, there were a lot of checks and balances,” said Tsang Chi-Ho, who co-hosted a long-running satire show and radio program before his firing this summer. Now, “if they cut a program, what can you do? There’s no legislator to oppose it, no newspaper to say that’s wrong. No one can protest on the streets.

“Their goal is to tell everyone: Just forget the RTHK of the past.” RTHK declined to make Li available for an interview. In a statement, the broadcaster said it would not comment on internal matters but that changes had been made in RTHK’s programming because it had become “a cause of public concern.”

“RTHK is a public service broadcaster but not a spokesman of the government,” the statement said. “RTHK aspires to be the most credible source of news and public information for the Hong Kong community.”

For proof of RTHK’s past willingness to flout the government, viewers needed look no further than Tsang’s satirical television show, “Headliner.” One recurring sketch featured the character of a domineering empress, who stood in for leaders ranging from Xi to Lam. Although the show received complaints from government supporters, top editors insulated the staff, Tsang said.

Last year, “Headliner” became a harbinger of the new RTHK. Executives suspended the show after Hong Kong police complained about an episode mocking the force.

A few months later, police arrested the producer of an investigation into authorities’ delayed response to a 2019 mob attack on protesters. Then, in February, officials released a report denouncing RTHK’s “seriously inadequate” editorial practices. They announced that the top editor, a veteran journalist, would be replaced by Li, a civil servant with no journalistic background.

The proposal form, according to two people who reviewed the document, asks whether complaints have ever been lodged against the producer; for a description of potentially controversial content, including background music; and for information about guests, including whether they are “known to be associated” with “radical political groups.” Six shows have stopped airing since Li took over, ranging from a weekly roundtable for social scientists to a nightly travel and leisure program that made way for mainland dramas.

Another discontinued show was “The Pulse,” a current affairs program that went viral after a World Health Organization official was asked in an interview whether Taiwan should be a member. (China, which claims Taiwan as its territory, has shut it out of the body.)

When taping the final episode of “The Pulse” this summer, the host, Steve Vines, signed off saying, “In these uncertain times, who knows what will happen in the future. But for now, goodbye and good luck.”

That was cut before airing.

Others did not even have the chance to try to say farewell. Leung Kai-chi, who co-hosted the social scientist roundtable, received a WhatsApp message at 8:36 p.m. the night before a scheduled taping.

“Management says that starting in July, RTHK Channel 31 will have an all-new campaign, and there will be new programming arrangements,” said the message, which was sent from a producer to the co-hosts and which Leung shared with The New York Times. “We were told to immediately stop production.”

“We understand how much pressure they’re under,” Leung said.

Shows still running are unrecognizable to those who made them.

During Fanny Kwan’s 13 years producing the news program “Hong Kong Connection,” she steadily turned out episodes, interviewing exiled Chinese dissidents and parents of autistic children. But when Li arrived, the new editorial committee vetoed a story, about student activists, she had been filming for weeks. Two other episodes by colleagues were also scrapped.

Kwan and other producers then strategized over crafting proposals that would pass muster, but two more pitches were rejected: one about commemorations of the Tiananmen Square massacre and the other a follow-up to the 2019 mob attack.

Kwan suspected the rejections had as much to do with her team as with the topics. Not long after rebuffing her student activism episode, executives tapped outside contractors to make their own “Hong Kong Connection” episodes.

While Kwan and her colleagues waited, sometimes for weeks, to hear back on their proposals, the new team churned out episodes on topics like electric vehicles and Chinese lion dances.

Since April, just five episodes of “Hong Kong Connection” have been produced by the original team. No episodes touched on the political crackdown.

“It’s our story,” Kwan said of the crackdown. “If Patrick Li didn’t come, I think we’d have been very, very busy.”

Another political show, “LegCo Review,” was outsourced after executives accused the producers of violating the approval process. A forum with candidates in December’s legislative election was reassigned from the Public and Current Affairs department to Infotainment and Variety, according to three people with knowledge of the matter.

Steering clear of politics is no guarantee of approval, either.

In August, Kong Yiu-Wing, an artist, received an interview request from an RTHK arts program about his exhibit “Hong Kongers Archive of 100 Objects,” a collection of artifacts exploring Hong Kong identity.

Kong was apprehensive. Pro-Beijing figures have attacked the idea of a discrete Hong Kong identity as unpatriotic, and Kong was unsure how the new RTHK would treat the topic.

When he met with the producers, they asked technical questions about his process. They did not film more politically tinged artifacts in the exhibit, like copies of pro-Beijing and pro-democracy newspapers, focusing instead on vintage recording equipment.

The day before the air date, an RTHK staff member called Kong to tell him the program had been scrapped by higher-ups.

“I really never would have expected this,” Kong said. “Basically every political topic that we could avoid, we already avoided.”

Li has defended his decisions as “very normal” editorial processes. Meeting with legislators in May, he acknowledged blocking episodes but said editorial independence did not mean independence for individual production teams.

Even pro-Beijing lawmakers questioned his approach. “People will worry that what you’re doing is a bit overdone,” one lawmaker, Chan Kin-por, said.

Most staff members interviewed said they had been drawn to RTHK by its mission. As a public broadcaster, they said, RTHK often made educational or socially conscious programs that commercial broadcasters would not. Although funding came from the government, an ethos was instilled in all new hires: RTHK’s bosses were the people of Hong Kong.

Many journalists spent their entire careers at RTHK. “People used to talk about working for RTHK as a dream job,” Leung, the former social science roundtable host, said.

Now paranoia pervades the headquarters. The new staff guidelines stipulate that all editorial decisions are confidential; breaches may warrant punishment. Communication with higher-ups must be done through a strict hierarchy; individual producers do not speak directly with the editorial committee. Episodes more than one year old have been deleted from RTHK’s website.

About one-third of the Public and Current Affairs department has departed. Three senior executives left within two weeks of Li’s appointment. Li has a new deputy — a transfer from the Marine Department.

Kwan, of “Hong Kong Connection,” has left, too. In July, she held a goodbye party with eight other colleagues who had agreed to quit together — in part to avoid having too many farewell events.

For a few months afterward, Kwan texted ex-colleagues still at the station to ask how they were doing. Eventually, she stopped.

“Because I can sense that nothing changed there, really,” she said. “Nothing better. Even worse.”