Amnesty International tweeted that the International Criminal Court must investigate Israel's attack on al-Shati refugee camp, saying direct attacks on civilians are war crimes. It added the attack on the media building on Saturday “must also be investigated as a war crime”. 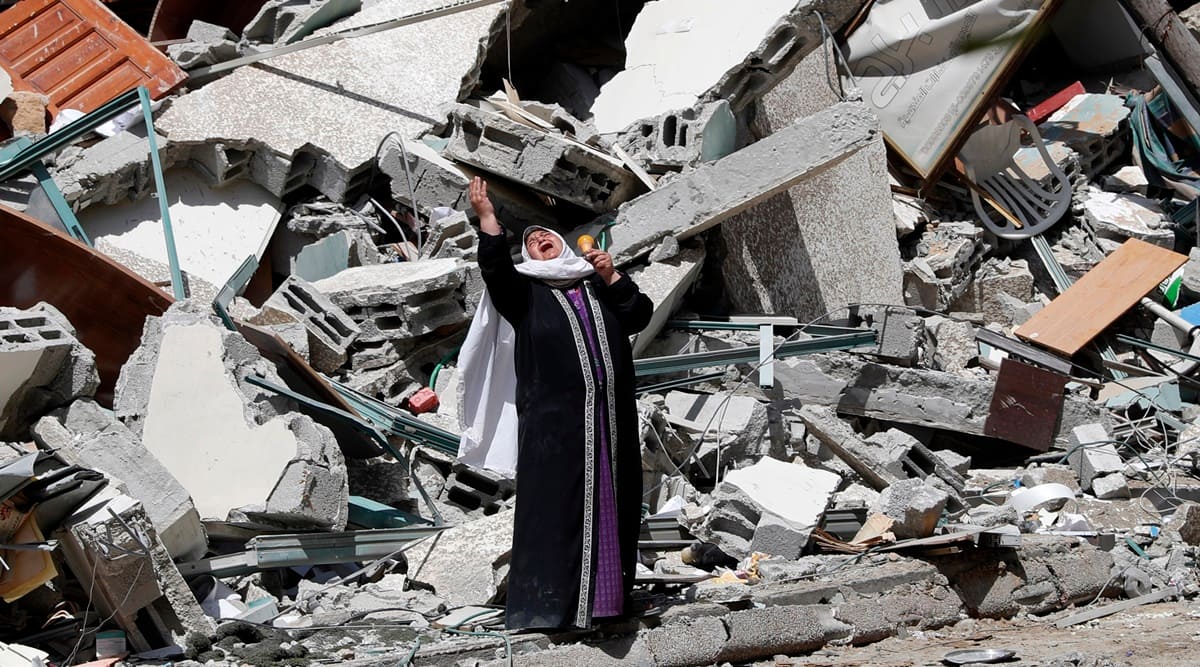 Israeli airstrikes on Gaza City flattened three buildings and killed at least 26 people on Sunday, medics said, making it the deadliest single attack since heavy fighting broke out between Israel and the territory’s Hamas rulers nearly a week ago.

The Gaza Health Ministry says the death toll from Israeli strikes on a main thoroughfare in Gaza City has climbed to 33, including 12 women and eight children, the AP reported.

Earlier, the Israeli military said it destroyed the home of Gaza’s top Hamas leader, Yahiyeh Sinwar, in a separate strike in the southern town of Khan Younis. It was the third such attack in the last two days on the homes of senior Hamas leaders, who have gone underground.

Israel has stepped up strikes in recent days to inflict as much damage as possible on Hamas as international mediators try to broker a cease-fire. But targeting the group’s leaders could hinder those efforts. A US diplomat is in the region to try to de-escalate tensions, and the UN Security Council is set to meet Sunday, AP reported.

The latest outbreak of violence began in east Jerusalem earlier this month, when Palestinians protested attempts by settlers to forcibly evict a number of Palestinian families from their homes and Israeli police measures at Al-Aqsa Mosque, a frequent flashpoint located on a mount in the Old City revered by Muslims and Jews. Hamas fired rockets toward Jerusalem late Monday, triggering the Israeli assault on Gaza.

The turmoil has also spilled over elsewhere, fueling protests in the occupied West Bank and stoking violence within Israel between its Jewish and Arab citizens, with clashes and vigilante attacks on people and property. The military said Sunday it struck Sinwar’s home and that of his brother Muhammad, another senior Hamas member. On Saturday it destroyed the home of Khalil al-Hayeh, a senior figure in Hamas’ political branch, AP reported.

It is unlikely any of Hamas’ upper echelon was at home at the time of the strikes. Hamas’ top leader, Ismail Haniyeh, divides his time between Turkey and Qatar, both of which provide political support to the group.

The 57-member Organisation of Islamic Cooperation held an emergency virtual meeting Sunday over the situation in Gaza, calling for an end to Israel’s military attacks on the Gaza Strip, the AP reported.

Speaking from Ramallah in the West Bank, Palestinian Foreign Minister Riad Malki blasted Israel, calling it an “apartheid state” that is practising “crimes and brutality against our people in Gaza.” He added that the latest round of violence that began on Monday has displaced 10,000 people.

“The rise of the Palestinian people has made it clear that Jerusalem is a red line,” Malki said. He added that “our people will not be exhausted by Israel’s killing machine”.

Pope Francis has denounced the “unacceptable” spiral of violence between Israel and the Palestinians, saying the deaths in particular of children was a “sign that they don’t want to build the future but want to destroy it.”

Francis prayed for peace, calm and international help to open a path of dialogue during his Sunday blessing, delivered from his studio window overlooking St. Peter’s Square.

The Pope said, “I ask myself: this hatred and vendetta, what will it bring? Do we truly think that we can build peace by destroying the other?” In unusually pointed comments, Francis added: “In the name of God, who created all human beings equal in rights, duties and dignity and are called to live as brothers, I appeal for calm and an end to the violence.”

An international human rights group is calling upon the International Criminal Court to investigate an Israeli attack on a building housing media organisations and another where 10 people including eight children were killed, calling such attacks a war crime.

Amnesty International said Sunday that they are deeply concerned over the mounting death toll in Gaza that has killed more than 180 people since Monday, the AP reported.

It added the attack on the media building on Saturday “must also be investigated as a war crime”.  It said the strike fits a pattern of Israel’s collective punishment of the Palestinian population.

Chinese Foreign Minister Wang Yi has called on the UN Security Council to seek an early de-escalation of violence between Israel and Gaza’s Hamas rulers. He also blamed the US for the council’s lack of action so far.

“Regrettably, the council has so far failed to reach an agreement, with the United States standing on the opposite side of international justice,” the state-run Xinhua News Agency quoted Wang as saying in a phone conversation Saturday with Pakistani Foreign Minister Shah Mahmood Qureshi.

He expressed support for a two-state solution, and said China, which holds the Security Council presidency this month, expects all parties to speak with a unified voice when the council discusses the conflict later Sunday.

The funeral of Soumya Santhosh, who was killed in a Palestinian rocket attack in Israel, was held at a cemetery in Keerithodu on Sunday by adhering to COVID-19 protocol.

A message of Syro-Malabar church head, Cardinal George Alencherry, was read out at the funeral.  Earlier, people, following COVID protocol, paid tribute to the departed soul as the body was kept at her residence.

Besides locals and politicians, Consul General of Israel in South India, Jonathan Zadka, also visited Soumya’s residence to pay homage. Talking to her relatives, Zadka said Soumya is regarded as an angel by the people of Israel. “I cannot imagine how difficult this loss would be for her family,” he said.

Later, in a tweet, Zadka said, “Honoured to pay my respects & convey our sympathies to the family and friends of Ms Soumya Santosh as she was laid to rest in her home town Keerithod, #Kerala. May she R.I.P Folded hands Folded hands our prayers are with the family that lost an angel in a cowardly #hamasterror attack.”

(With inputs from AP and PTI)