Those stuck at the Poland-Belarus border have limited food, water and medical supplies, and must endure plummeting temperatures at night. 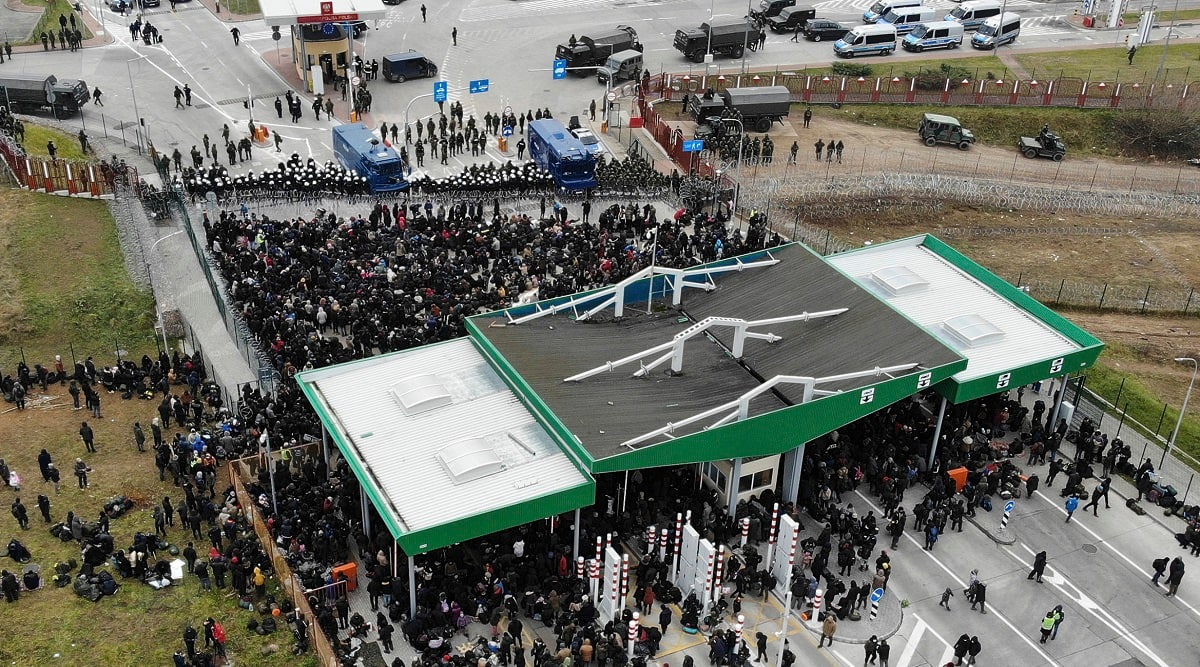 The government of Iraq said Monday it will begin arranging the first repatriation flight for citizens wishing to leave Belarus.

“Iraq will carry out a first flight for those who wish to return voluntarily on the 18th,” he told Iraqi television.

Iraqi Airlines suspended its service between Baghdad and Minsk in August. However, it has now been authorised to operate one-way flights from Minsk to Baghdad in response to those who found themselves stuck at the border, according to an airline spokesperson.

On Sunday, the national carrier of Belarus announced that it would be barring citizens from Iraq, Syria and Yemen from flights leaving from Dubai to Minsk. Afghan nationals have also been added to the list of countries Belavia airlines has banned from flights.

In a statement on its website, Belavia airlines said: “According to the decision of the competent authorities of UAE please note that starting from 14.11.2021 citizens of Afghanistan, Iraq, Yemen, Syria will not be accepted for boarding on flights from Dubai to Minsk. In this regard, Belavia is strengthening documents verification during checkin for flights from Dubai.”

The airline also denied facillitating the “transportation of illegal migrants to the Republic of Belarus.”

On Friday, Turkey’s aviation authority announced that it would not be allowing travelers from Iraq, Syria or Yemen to travel on flights to Belarus from its airports. The decision was warmly received by EU leadership.

“Thank you to the Turkish authorities,” said Charles Michel, the European Council president, on Friday.

The European Union is expected to tighten sanctions on Belarus later on Monday and may include airlines and travel agents involved in transporting migrants to Europe.

Local media in Belarus have reported President Alexander Lukashenko as saying that authorities are trying to convince migrants to return home.

“Active work is underway in this area, to convince people: Please, return home. But nobody wants to go back,” Lukashenko has been quoted by state news agency Belta. Lukashenko is also reported to have said that migrants could be flown from Minsk to Munich by its national carrier, if Poland were unwilling to create a “humanitarian corridor.”

As European leaders attempt to cut routes of travel, thousands of migrants who are caught in limbo between Poland and Belarus have been facing nightmarish conditions at the border.

Those stuck in the remote region have limited food, water and medical supplies, and must endure plummeting temperatures at night.

Despite the humanitarian crisis on its border, Poland is not relenting.

DW correspondent Barbara Wesel said that Poland’s leadership appears to be avoiding the developing humanitarian crisis on its border. “They don’t comment on the humanitarian situation on the border, they more or less are denying it.

“They passed last week in parliament an ordinance that makes pushbacks legal according to Polish law, so that’s what they try to do,” Wesel said.

Empowered by Polish law and with the help of infrared cameras, border guards continue to return groups of migrants attempting to make their way into the country.

“People they catch on the border regions who have managed to cross the border, if they come upon border guards, they will be pushed back onto Belarus territory, so this game — back and forth, back and forth — goes on with horrible consequences,” Wesel added.

Polish authorities reported a fairly quiet Sunday night at the border, with no major incidents reported despite an anticipated push to break through. However, around 1100 UTC, border guards reported that large numbers of migrants had begun to mass at at the border crossing in Kuznica under what they said was the supervision of Belarusian security personnel.