It is difficult to overstate the significance to Native people of Haaland’s role as the first Native American to lead a Cabinet agency, specifically an agency once responsible for eradicating the homes, culture and often the lives of Indigenous people. 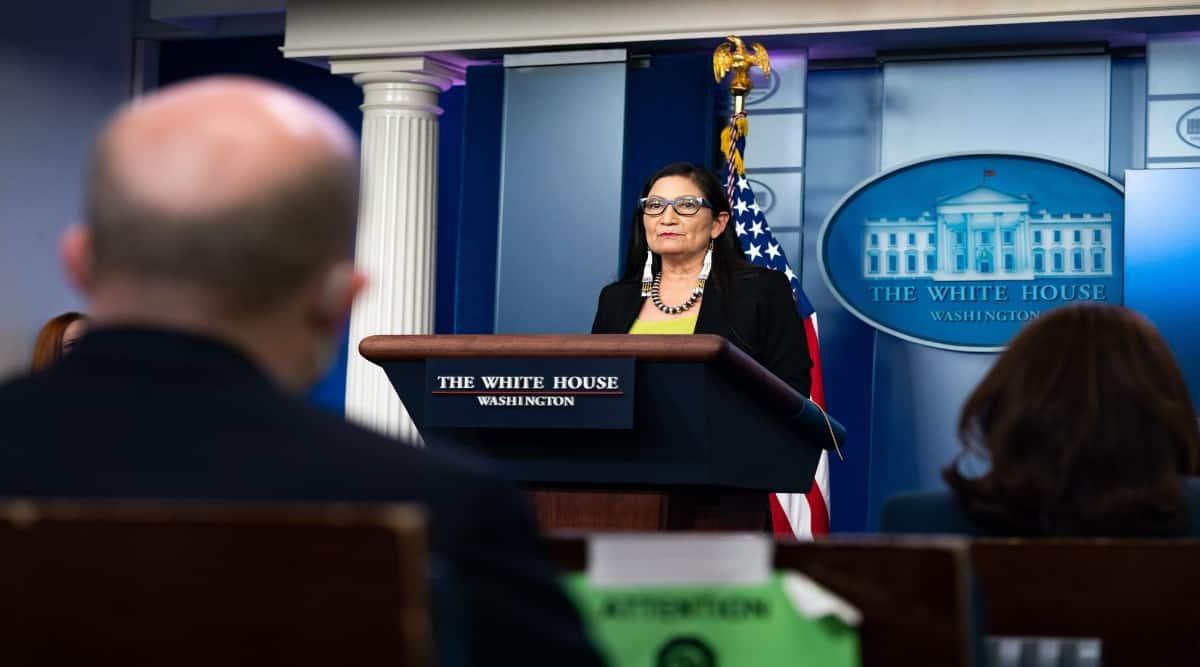 Six members of the Laguna Pueblo community gathered last week in the cool, fragrant kitchen of an adobe house, discussing their hopes for “Sister Deb” — Deb Haaland, a Laguna citizen, former congresswoman from New Mexico and now secretary of the interior.

“I’m so excited about her,” said Lorenzo. “But it’s a little heartbreaking to hang all our hopes on one person.”

It is difficult to overstate the significance to Native people of Haaland’s role as the first Native American to lead a Cabinet agency, specifically an agency once responsible for eradicating the homes, culture and often the lives of Indigenous people.

“The policy of removal, except under peculiar circumstances, must necessarily be abandoned, and the only alternatives left are to civilize or exterminate them,” Interior Secretary Alexander H.H. Stuart declared in 1851, frustrated by tribal resistance to forced resettlement.

It is also difficult to overstate the pressures and expectations Haaland faces from her people, who hope she will address 150 years of betrayal by a department officially entrusted with ensuring Native Americans’ welfare. 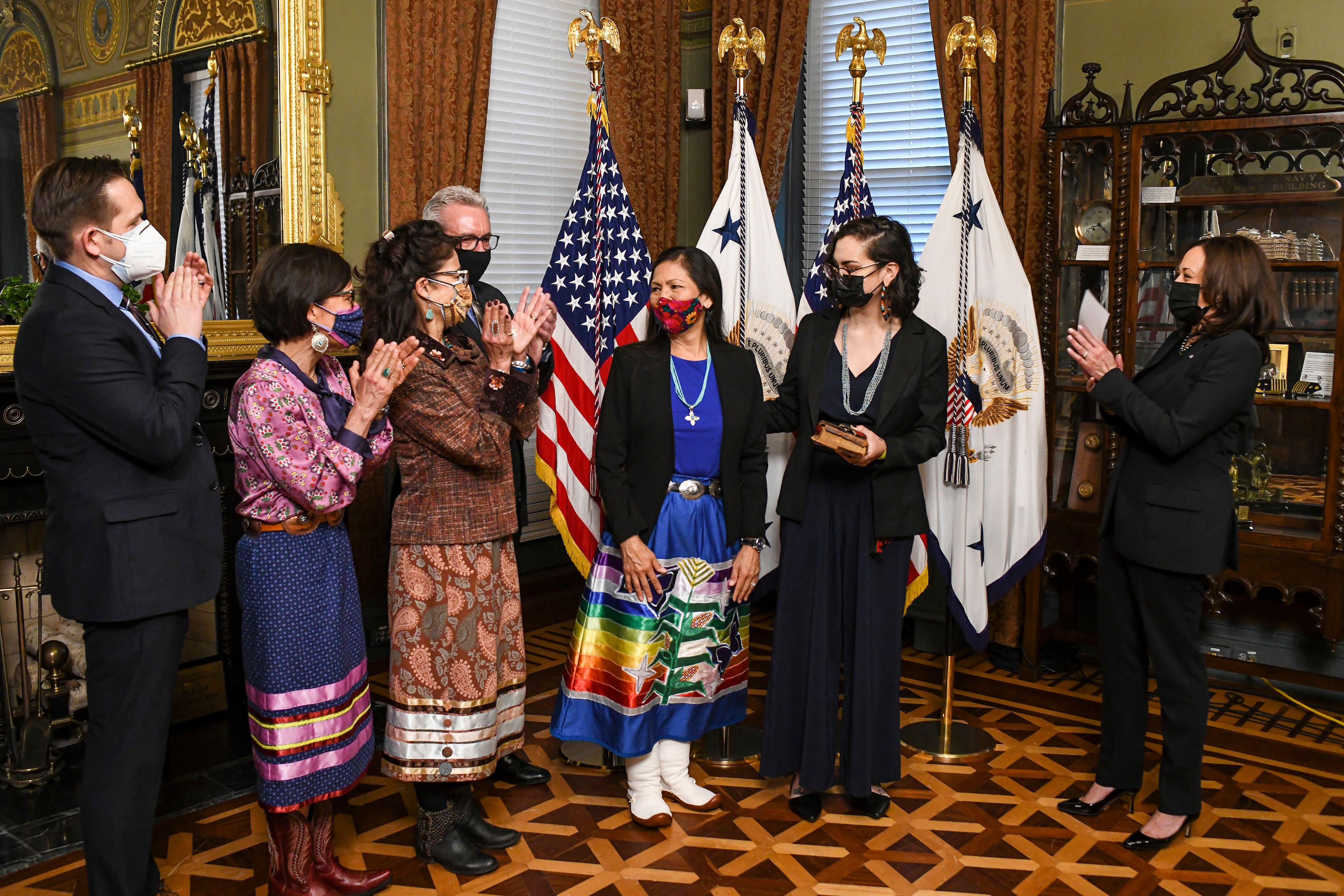 Today, 5.2 million people identify as American Indian or Alaska Native, alone or in combination with another race, but they remain one of the most overlooked minority populations in the country. Only one-third of Americans believe Native people face discrimination, according to IllumiNative, a research and advocacy group.

Crystal Echo Hawk, IllumiNative’s founder, said most Americans’ knowledge of Native history stops in 1890, when the Army massacred hundreds of members of the Lakota Sioux tribe at Wounded Knee Creek in South Dakota, one of the worst chapters in the conquest of America’s Native people. By then, the Native population in the United States had already declined by nearly 90% from the landing of Columbus, to fewer than a quarter million. Today, nearly 90% of states’ history standards do not mention Native Americans after 1900, Echo Hawk said.

“There’s a lot of expectations and hope projected on Deb, because there’s so much wrong with how this country has treated and continues to treat Native people,” Echo Hawk said. “She’s heading an agency charged with managing the federal trust, where Native people are stuck in the same place with parks and trees and animals.”

Haaland’s portfolio is immense, addressing climate change, regulating mining and oil drilling on federal land and national waters, irrigating much of the West, monitoring earthquakes, preserving national parks and protecting wildlife. But her early moves make clear she prioritizes the Interior Department’s responsibility for Native peoples, who fall under the jurisdiction of the department’s Bureaus of Indian Affairs and Indian Education.

For many of the tribes, the key to the Interior Department’s power is its control of 500 million acres of public land, or one-fifth of the United States. Much of that was once tribal lands, and they are still subject to constant disputes over treaty rights, land acquisition and natural resources exploitation.

In one of her first moves, Haaland streamlined the process for Native American tribes to reacquire public lands from the federal government. The process, called Fee to Trust, enables tribal governments to consolidate and re-establish jurisdiction over land in or near reservations.

Trust acquisitions enhance the power of the nation’s 574 recognized tribes, which are sovereign governments, to provide housing and law enforcement, protect hunting and farmland, and manage and benefit from natural resources. Haaland’s order reversed a Trump administration policy that stalled tribal acquisitions of these lands by centralizing the approval process in Washington.

Last month, Haaland approved a new Constitution for the Cherokee Nation that explicitly grants full rights of citizenship to the Cherokee Freedmen, people formerly enslaved by Cherokee tribal citizens. Disputes and litigation over Freedmen citizenship have divided the Cherokee, Choctaw, Chickasaw, Muscogee (Creek) and Seminole Nations since 1866. In approving the Cherokee Constitution, whose text requires the assent of the Interior Department, Haaland encouraged other tribes to follow suit.

Haaland has also pledged to bring more federal resources to bear on missing and murdered Indigenous people, especially women, work she began as a member of Congress. She has helped create a missing and murdered unit and worked on enacting the Not Invisible Act, which established a commission led by the Interior and Justice Departments on reducing violent crime against Indigenous people.