The State Department disclosed a list of 82 gifts from the Saudis to Trump administration officials on the May 2017 trip, which ranged from sandals and scarves to furs and daggers. 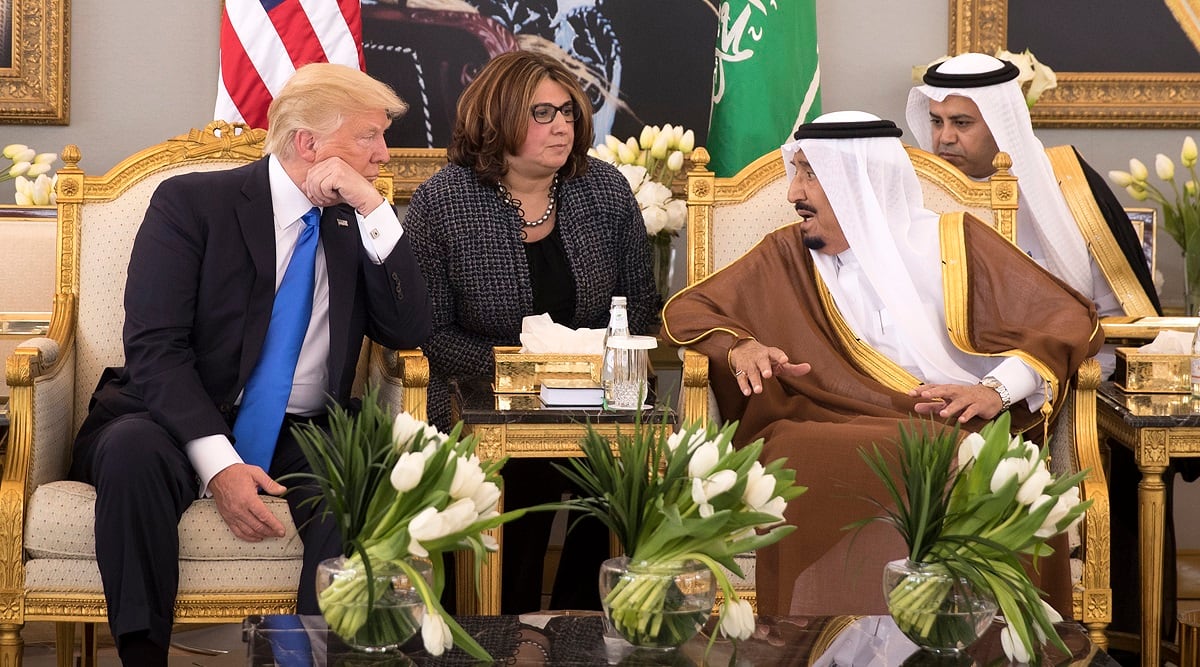 The Saudi royal family showered Donald Trump and his entourage on his first trip abroad as president with dozens of presents, including three robes made with white tiger and cheetah fur, and a dagger with a handle that appeared to be ivory.

A White House lawyer determined that possession of the furs and dagger most likely violated the Endangered Species Act, but the Trump administration held onto them and failed to disclose them as gifts received from a foreign government.

On the last full day of Trump’s presidency, the White House handed them over to the General Services Administration — the wrong agency — rather than the US Fish and Wildlife Service, which seized the gifts this summer.

At that point, there was a surprise.

The furs, from an oil-rich family worth billions of dollars, were fake.

“Wildlife inspectors and special agents determined the linings of the robes were dyed to mimic tiger and cheetah patterns and were not comprised of protected species,” said Tyler Cherry, a spokesperson for the Interior Department, which oversees the US Fish and Wildlife Service.

Officials at the Saudi Embassy in Washington declined to comment.

The tale of the furs is but one example of how gift exchanges between the United States and foreign leaders — a highly regulated process intended to shield administrations from questions of impropriety — devolved into sometimes risible shambles during the Trump administration.

The State Department’s inspector general is investigating allegations that Trump’s political appointees walked off with gift bags worth thousands of dollars that were meant for foreign leaders at the Group of 7 summit planned for Camp David in Maryland in 2020, which was canceled because of the coronavirus pandemic. The bags contained dozens of items purchased with government funds, including leather portfolios, pewter trays and marble trinket boxes emblazoned with the presidential seal or the signatures of Trump and his wife, Melania.

The inspector general continues to pursue the whereabouts of a $5,800 bottle of Japanese whiskey given to Secretary of State Mike Pompeo — Pompeo said he never received it — and a 22-karat gold coin given to another State Department official.

There is also a question about whether former second lady Karen Pence wrongly took two gold-toned place-card holders from the prime minister of Singapore without paying for them.

In addition, the Trump administration never disclosed that Jared Kushner, Trump’s son-in-law and a top White House adviser, received two swords and a dagger from the Saudis, although he paid $47,920 for them along with three other gifts in February, after he left office.

To be sure, Trump’s handling of foreign gifts is not at the top of his critics’ list of administration offenses. And there is no evidence that he or Melania took any gifts to which they were not entitled.

But ethics experts said the problems reflected larger issues with the Trump presidency.

“Whether this was indifference, sloppiness or the Great Train Robbery, it shows such a cavalier attitude to the law and the regular process of government,” said Stanley Brand, a criminal defense lawyer, ethics expert and former top lawyer for the House of Representatives.

The State Department declined to address the specifics of how the Trump administration handled gifts but said in a statement that it “takes seriously its role in reporting the disposition of certain gifts received by US government employees” and that it was “investigating the whereabouts of gifts that are unaccounted for and the circumstances that led to their disappearance.”

This article is based on public documents and others produced by the federal government under the Freedom of Information Act, interviews with current and former government officials, and on-the-record responses to questions from several government departments and agencies. The documents include an index of gifts that Trump and his family received in Saudi Arabia in 2017 that the National Archives provided to two Democratic senators, Sheldon Whitehouse of Rhode Island and Richard Blumenthal of Connecticut.

The details about the missing gifts and the other widespread problems with them have not been previously reported. Politico reported in August that the State Department’s inspector general was investigating about 20 types of missing gifts.

The nation’s founders were so concerned that European nobility could co-opt US officials with lavish gifts that they included in the Constitution a clause making it illegal for an official to take anything of worth from a foreigner.

In 1966, Congress passed a law detailing how a US official could keep a gift of only relatively minimal value, now capped at $415. Subsequent amendments defined gifts as government property and created a standardised process for how officials were to deal with them.

To add transparency, provisions require administrations to annually disclose the gifts given to US officials by foreigners and their appraised value. The laws have no criminal penalties, although legal experts said that anyone caught taking government property could be prosecuted for theft.

The Trump administration’s gift problems date from the president’s trip in May 2017 to Saudi Arabia, whose leaders were jubilant that Trump had chosen the kingdom for his first visit abroad and was embracing them after years of tensions with the Obama administration. The Saudis have a history of giving lavish gifts to American presidents, and Trump and his aides appeared to receive a generous bounty.

The State Department disclosed a list of 82 gifts from the Saudis to Trump administration officials on the May 2017 trip in response to a Freedom of Information Act request filed shortly after Trump returned home. The gifts ranged from ordinary ones such as sandals and scarves to expensive ones such as furs and daggers.

Nine of the most expensive presents — the three furs, three swords and three daggers — were sent to the White House gifts unit to be assessed and appraised but never appeared on any of the Trump State Department’s legally required annual filings for foreign gifts, according to a review of government documents.

It was not until last Jan. 19 that the White House sent the nine gifts to the General Services Administration, according to a statement from the agency.

After The New York Times this past summer inquired about why the agency was in possession of items in violation of the Endangered Species Act, the General Services Administration alerted the US Fish and Wildlife Service, which in July sent an agent to collect the furs at a government warehouse in Springfield, Virginia. The agent also took the dagger, which a visiting Qatari official had given to the Trump White House in Saudi Arabia.

Inspectors examined the items, discovering more problems as they determined that the furs had been dyed and were fake. The dagger’s handle “appears to possibly contain tooth or bone of some variety” — the materials of elephant tusk — “although additional laboratory analysis would be required to identify the species,” the Interior Department said.

It is unclear if the Saudis knew about the fake furs or were deceived by a supplier, but Bruce Riedel, a senior fellow at the Brookings Institution and an expert on Saudi-U. S. relations, called the gifts highly embarrassing.

“The two most important things for them is to look like they’re aboveboard world actors, and are rich and show their wealth,” he said.

A spokesperson for Trump did not return several messages seeking comment.

As Trump political appointees in the State Department’s protocol office packed up their belongings in January, career officers saw their departing colleagues leave with the gift bags meant for foreign leaders at the G-7 summit the previous year, the inspector general has learned. The bags had been in storage in a large room at the State Department known as the vault.

Once the Biden administration took over, career officials began to examine the accounting of foreign gifts without Trump officials looking over their shoulders.

At that point, career officials discovered that many of the gift bags were missing, as were more than a dozen additional presents given to Trump officials. The number was unusual: Government documents from the Obama and George W. Bush administrations show no unaccounted gifts given to White House officials, Cabinet members or members of the first families.

In the months that followed, the Times located many of the gifts, including a bottle of perfume and a Persian silk carpet that the Qataris had given to Steven Mnuchin, the former Treasury secretary. (His gifts were supposed to have been sent to the General Services Administration for disposal, but they were sitting in storage at the Treasury Department.)

The bottle of whiskey for Pompeo remains unaccounted for, as does the 22-karat gold coin and a porcelain bowl from Vietnam for John Bolton, Trump’s third national security adviser, who sent the Times an email exchange with the Trump White House showing that he never took it and did not want it.

One mystery has been solved: When the Times reached out to Karen Pence, a lawyer for the family said that she had taken the gold-toned place-card holders after a White House ethics lawyer told her she could keep them because they had been appraised at less than the minimal threshold, which was $390 at the time.

But according to the information provided to the State Department by the Trump White House, she should have paid for the place-card holders. Under federal guidelines, if a US official is given multiple gifts in a meeting with a foreign official, the American must pay for them if the total exceeds the minimal threshold. The State Department said the Trump White House reported that Karen Pence had received the card holders along with a framed print and a clutch purse, which totaled $1,200.

Richard Cullen, the lawyer for the Pence family, said the State Department was wrong — that the gifts had been given at different meetings, and Karen Pence had declined to keep the print and clutch. In response to Cullen’s explanation, a State Department spokesperson said it stood by its characterisation of Karen Pence’s gifts.